I bought my last 2 suppressors from dealer stock on 28 Jan 2021.  My check for the tax stamps was cashed by BATF on 6 Mar 2021.  356 days so far.  The last suppressor that I purchased prior to these 2 took 270 days from purchase to delivery.  Ahhhhhhhh well... the new e-file system promises to deliver your tax stamp in less than 90 days.  Covid.  Biden.  Excuses.

Nick Saban wrote a letter to the US Senate supporting the new Democrat "voting rights legislation" and telling Manchin and Senima to get on board and pass this new voting rights act.  Saban is an idiot.  If he wants to be a politician he should give up his coaching career and run for office.  But in our modern world, the game is religion and Nick Saban is a god.  There is nothing he can do to prevent 101,000 Tide fans from filling that stadium for every home game.  Don't get me wrong. 'ol Nick can believe and say whatever he wants to.  I just find it difficult to see any sincerity in his voice...  And I think he should stick to coaching, since that's what the People of Alabama pay him to do.

'ol Joe is currently polling across the board at about a 36% approval rating.  Because he sucks.  36% of America is Democrats.  FJB.  Anyway, I saw yesterday that one major news source was saying he was 49%.  Ya know what?  'ol Joe's approval rating is whatever the media can make his soft brained followers believe it is.   I can't believe that even 36% of my fellow Americans can support his dumb ass.

When the media continuously repeats what Leftists want, whether those be a majority of Leftists or not, folks start believing what they are told. Pretty fucked up.  The internet, 24 hour news, and social media are a propagandist's wet dream.

Media is powerful.  This meme is from a site called "Conservatives Are Destroying Our Future" Their motto is "#vote blue no matter who #vote blue 2022". 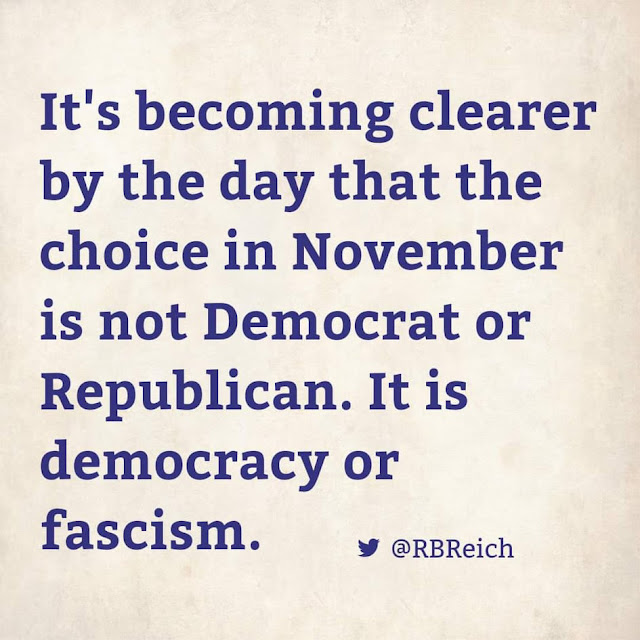 Obviously this statement could be made by someone on either "side", and be accurate.  I don't think Robert Reich is a Conservative.

Anyway, I'm beginning to believe that Americans of all ideologies are too stupid for "self government".

The end is near, I believe.  I had hoped for peace and happiness in my old age, at least on a personal level. I could ignore the world in an attempt to find my personal peace, but the world will still be there.  A world full of Leftists trying to tell me how to live my life.  That cannot be escaped.

I'm an Alabama fan. I quit watching after king in his own mind saban lead a blm rally. I just started watching again as I told myself it's the game I love. Then this idiot comes up with his pandering drivel just to recruit. No one in their right mind can think this voting rights bill is anything other than a way to lawfully cheat. Unfortunately there are a huge number of followers that think he is god and therefore correct. He is no more qualified on this subject than the average voter. If you are objective, take it with a grain of salt because his position is completely self serving! I say as always.............Just shut up and coach football!

I'm not a huge football fan but I like Alabama and whoever is playing Iowa. ;) (Kirk Ferentz, Mr. Mediocrity, The 7 million dollar man... Use to like Iowa, too, before Ferentz)

There needs to be legislation that both sides can get behind before any of it becomes law. I hate to say it but I believe most of what both sides say is bullshit. Sad that we have come to this point.

If Saban and every member of his staff and team stood up and made comments that every American found repulsive, Bryant-Denny would still fill up with 102,000 rabid fans for every home game. I guess the problem is bigger than we think...

I agree. Bryant-Denny will never be empty. Full disclosure I have a son there and had an older son there, so I'm intimately familiar! I do think fair and secure voting is a solvable problem that no one seems to want solved. Too cumbersome when you are trying to win (cheat) elections! The Lotto knows where Saturday's winning ticket was sold before the next morning. That tells me right there that the technology exists and has for some time to have secure elections with only legal citizens eligible to vote. Too easy I assume. Best to argue, fight and distract from the more difficult problems. Trying to solve to more difficult problems would require work from both sides and not just grandstanding "Oh look at me". We should be represented and not looked down upon because in their eyes we are to stupid to be free.