From David P. in NC:

Justice William O. Douglas (1898-1980): "When a legislature undertakes to proscribe the exercise of a citizen's constitutional rights it acts lawlessly and the citizen can take matters into his own hands and proceed on the basis that such a law is no law at all."

Economist Walter E. Williams: "In Philadelphia, where I grew up, students who posed severe disciplinary problems were removed. ... Whether or not there are resources to help them is not the issue. The critical issue is whether they should be permitted to make education impossible for students who are capable of learning. It's a policy question similar to: What do you do when you have both drunken drivers and sober drivers on the road? The first order of business is to get the drunken drivers off the road. Whether there are resources available to help the drunks is, at best, a secondary issue."

obama cares about you...

Is there a debt ceiling...?

By How Much Did Congress Increase the Debt Ceiling? Hint: It’s a Trick Question


Just a few weeks before President Obama releases his budget proposal to boost deficit spending for the remainder of his term, Congress voted to “raise the nation’s borrowing limit through March 2015.” But there’s one big question: By how much did Congress raise the debt limit, exactly?
As Heritage’s Romina Boccia explains on One America News Network’s Daily Ledger, Congress didn’t exactly raise the debt limit. Instead, Congress voted to “suspend” the debt limit for more than an entire year. This is an important distinction, because it means that there is no current limit on how much the United States Treasury may borrow.
Rather than put a ceiling on the national debt, Congress decided to waive the limit until next March, at which point the debt limit is automatically raised by the amount borrowed over the course of the year. Essentially, it gives the Treasury Department a blank check to borrow as much as is needed to finance all government spending authorized in law, regardless of incoming revenues.
Moreover, a clean increase or suspension ignores the debt limit’s purpose in the first place. Hitting the debt limit presents a focused opportunity for lawmakers to confront the rising debt and enact reforms to limit spending growth. As Boccia explains:


The debt limit is supposed to act as a fiscal check on spending and borrowing, and it is supposed to [protect] younger generations and future generations from excessive spending today…. [The nation should] have a limit in place that encourages fiscal restraint, and when you reach that limit, Congress should make spending cuts to put the budget on the path to balance.

But what did Congress do? Shirk that job until at least next year.
Even more troubling, the suspension of the debt limit is another abdication of Congress’s constitutional power to control borrowing, which it has now delegated to the executive branch. As Boccia further explains:


The debt limit was the last remaining tool with which Congress exercised its constitutional power to control borrowing. By suspending it, they’ve given up that power as well, concentrating all borrowing decisions in the Treasury in the executive [branch], which is President Obama’s Treasury.

Congress recklessly increased spending by $45 billon just this January with the massive omnibus bill. And President Obama is pushing an expansionary federal agenda that would increase deficit spending during his remaining term in office. Meanwhile, the President is also dropping any semblance of dealing with the key drivers of spending and debt during his term in office.
Taxpayers should be extra vigilant this year so President Obama’s year of inaction on fixing the debt does not end up becoming a “year of action” on higher spending that ends up exacerbating an already dire budget situation. Whats wrong with this picture...?

The duty of a patriot... 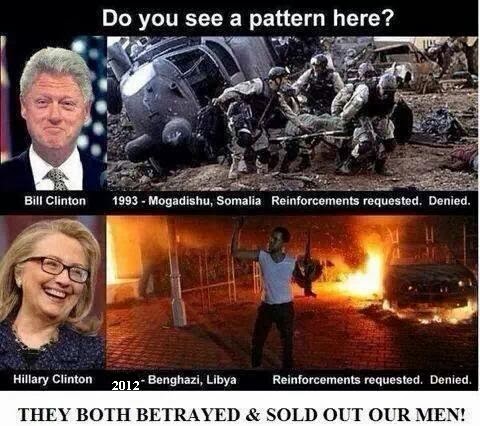 What Bill Clinton did (or failed to do, after promising the full support of the military, if needed) during the Mogadishu debacle was unforgivable, period.  His decision to abandon the troops he had sent into battle mere hours before was based solely on the nearly instantaneous international political criticism that began once the operation started and the world found out about it.  May he rot in hell.  Spineless, emasculated piece of crap.  He got a pass because the ladies that elected him still loved him.  And because government is corrupt and will protect its own.  And his government was especially ruthless and corrupt.

Hillary?  She was complicit in the Benghazi scandal from beginning to end, yes.  Stupid?  Possibly.  She didn't make the decision on her own not to support the people on the ground in Benghazi, though.  She had help with that.  I tend to believe that the lack of support during the Benghazi debacle had  sinister intentions and was preventable.  I wonder why obama didn't throw her to the wolves?  Perhaps he is afraid of her?  Perhaps she is as evil as he is?  Perhaps she was acting as his lackey and he was appreciative of what she had done?

Guy goes in an adult store and asks for an inflatable doll.

Guy behind the counter says, 'Male or female?'

Customer says, 'What the hell does religion have to do with it?'

Counter guy says, 'The Muslim one blows itself up."

Look what it did to the White House...

I hope folks remember what the media has done to promote and protect obama.  And what it has done to hurt America.  There is a reason that rubbers are called scumbags...
Posted by Blue at 19:39 2 comments:

The banality of evil, and other short stories...

A good read.  Well worth your time.  From David P. in NC.

Some say it means "Nothing but Communists".

Their only purpose is to distract you from the truth.  They tell you what they want you to hear often enough that you believe it.  And you ask for more.

Is there an unbiased source any longer that reports the truth?  If there is, does anyone believe the truth? 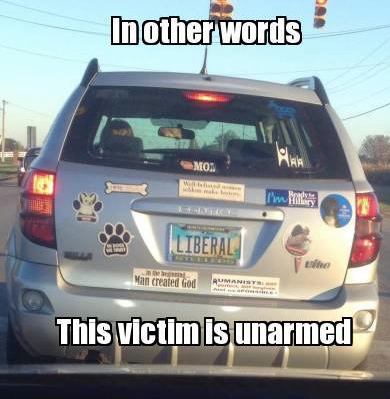 The right to keep and bear arms...