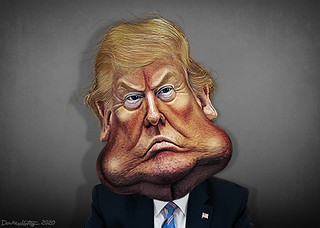 I'd like to believe that Donald Trump is so "hated" by politicians simply because he isn't one of them.  Because they are afraid that he will expose them for what they are, whatever that may be.  Anti-American Globalists.  Or something.  It isn't just Democrats.

I think we can do better.  I think we could find a candidate who isn't one of them, who could win.  A candidate who could be as effective as Donald Trump, without polarizing the world.  Not even all the Republicans agree any longer.

But then again, perhaps it is Trump's ability to polarize entire factions, entire populations, that makes him effective?

That's what all of the show in DC is about.  Politicians trying to make sure that Donald Trump is never President again.  Regardless of what the American People want.

On his second day in office as the newly sworn in President, 'ol Joe Biden sat down and signed a pile of executive orders that nullified many of Trump's efforts.  It was a juvenile attempt to show his soft brained followers that he was a bad ass.  Badder than Corn Pop.  Because Corn Pop was one bad dude.  And the Leftists shed tears of joy and danced in the streets.  No more mean tweets.

And now the Leftists hate 'ol Joe.  He isn't gettin' 'er done.  And the people who supported him are mad.

I read an article yesterday from Reuters that claimed 'ol Joe just had his worst week ever.  A 43% approval rating.  Still a bit better than The Donald's lowest rating, said Reuters.

But wait!  I saved an article from Newsweek from 3 weeks ago that said 'ol Joe's approval rating for the week leading up to January 13th, 2021 was lower, at 33%, than Trump's lowest.  At that time, his approval rating was down 3 points from November, which saw 'ol Joe polling at 36% approval.  Something ain't right here...  The media.  They lie.  ;)  33% is lower than 43%, right?  But the media is confident that their Leftist followers won't bring it up...

Who the hell does that?

Filed under 'Why they hate him'. joe tentpeg