Racists, and other things...

Andrew Yang said "I don't think Joe Rogan is a racist - the man interacts with and works with Black people literally all the time."

The woke Leftists heard that and went nuts, forcing Yang to retract his statement.  Did Yang mean what he said?  If so, retracting it to appease the woke Left makes him a coward.

The woke Leftists in the Georgia Legislature said "whoa, Clarence Thomas?  He ain't one of us".  One Democrat legislator actually said "Ok, he's been good, but he may still mess up".  WTF does that mean?  Fortunately, the Republicans aren't as willing to roll over and play dead in the face of Woke Leftism.

Whoopi?  No sympathy for her.  Her entire being supports Blacks and Black causes.  She is so predjudiced that she didn't even realize what she said.  Her entire world is about Blacks.  No one else exists.

Ya know who the biggest racists are in this country?  In the entire world?  Woke Leftists.  Period.  And they are willing to crush you like a bug if you aren't 100% with them...

I hope that you recognize that the Leftists have changed our language to be understood as something that it doesn't actually mean...

On a more positive note, Colin called me from my gun dealer in Marion this morning to let me know my Tax Stamp for my Sparrow was in.  I said "cool".  He said "didn't you have more than one coming?".  I said "yeah, there will be a 30 cal suppressor as well".   "Yeah, that's here, too..."

I told him I would see him in the morning since my truck is loaded with a "favor for a dear friend" right now.

Anyway...  a lot of things going on.  My kitty was really out of sorts yesterday.  Wouldn't eat at all.  She would get up to drink then come back into the kitchen and lay beside me.  With all of her known health issues, I was worried.  She finally ate late last night.  She's a piggy today... 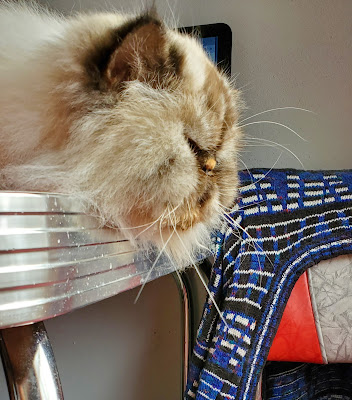 And my middle son called me, horribly upset.  They took their Pit Bull, Zena, to the vet this morning to have her spayed.  She died of internal bleeding after they closed her up.  By the time they realized there was a problem, it was too late.  My son and his girlfriend are devastated. 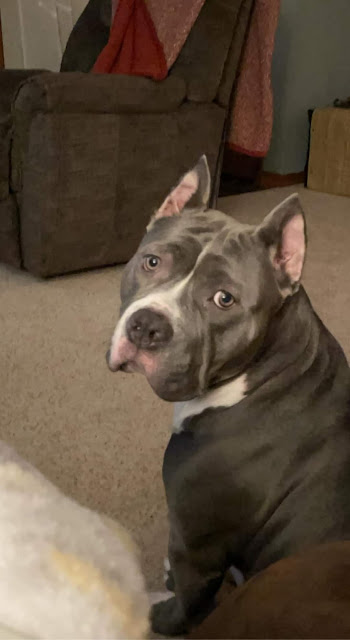 Good thoughts to middle son and his gf, they will see Zena at the bridge. That is flat wrong, the vet should be put out of business. legally of course. ;)

The "woke" idiot hypocrites? karma knows who they are.

Thanks, Grog. Eric and Dawn stopped by a bit later. They are crushed. I have to admit, Zena was a cool dog. Watching her and Eric interact was pretty neat. We invest more than we know in our critter companions.

Pretty is back to being boss of the house. I don't know what was wrong with her yesterday, simply thankful that she's better today.

So, so sorry to hear about Zena. That is devastating. She looks like a wonderful dog. Glad to hear that your cat buddy seems to have recovered. They really are family, these critters.