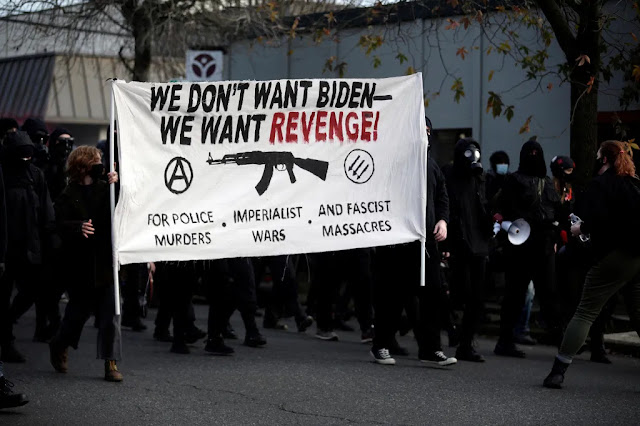 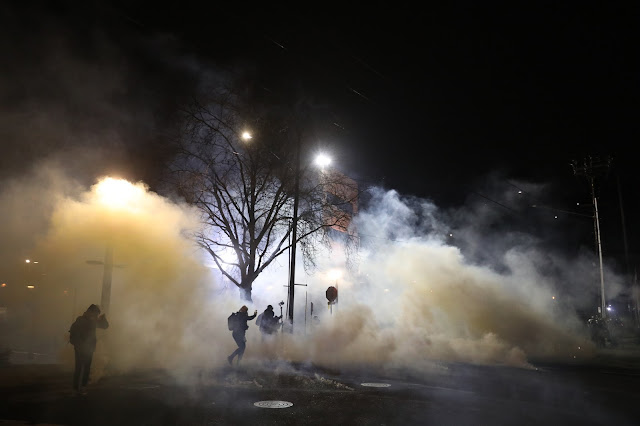 I can't say I'm disappointed.  I got up this morning to see where all of the Right wing riots and insurrection took place yesterday.  It didn't.  The shills on the Left assured us that there would be Right wing violence at State Houses and other government buildings in protest of the Harris-Biden inaugurations.  Nothing.

I did read where Leftists did some more damage in Portland and Seattle.  Damaged the Democrat Party headquarters in Portland.  Leftists protesting the Harris-Biden administration.  "We won't be governed", they said.  Leftists.  Harris-Biden isn't far enough Left for them...

And I got on the fb thinking that the smugness and arrogance shown by our friends on the Left yesterday, shoving it in the faces of anyone who is not with them, would be toned down a bit.  Not so.  They are still smug and arrogant.

Within 2 minutes of reading the posts of people I know, I saw the use of the terms Trumpanzees, Trumpsters, Trumpettes, Trumpkins, Trumpites, Trumptards, and Trumpshits to describe people who did not support Harris-Biden.  After 8 years of calling those who disagree with them racists, misogynists, homophobes. xenophobes, white supremacists, nazis, etc, then 4 years of the "Trumpisms", you would think that those Leftists would have grown up.  There was name-calling by the Left during the administration of Bush II as well.  It is apparently one of the favorite tools of the mental giants when disparaging anyone who doesn't agree with them.

There is no growing up of Leftists.  There will be no "unity and cooperation" during this administration.  Not because the Right refuses, but because the Left will not allow it.

I had a Liberal friend from Iowa City tell me one day that "If you aren't actively supporting the cause, you are against the cause".  That was during last summer's peaceful protests.  He is nearly my age.  What the actual fuck is "the cause"?

...Yet somehow, WE are the ones who need to be "deprogrammed..."

Rule of the game; don't engage in battles of wits with unarmed opponents...

I have tried many times to understand the thought process of the Progressive/Liberal/Leftist. I have come to the conclusion that there is no formal individual thought process... Individual Progressives/Liberals/Leftists are dependent upon the Party for conveying to them their approved thoughts, then it becomes the simple repetition of talking points. Thought not required.

Now that the American Communist Party has full control of .Gov these low rent low IQ idiots will quickly cease to be useful to them. The rabble-rousers who are instrumental in the commies climb to power are among the very first who are put up against the wall. They aren't useful anymore but they DO pose a threat to the lefts grasp on power. That means they get eliminated. Its what the commies ALWAYS do. It will be difficult to muster any sympathy for them.

Dan... You're right. They always eat their own.

Good morning, yeah, the seattlistan "city council" ( meh ) is not amused with the protesters, but they won't shut this down.

On the lack of respect, LawDog agrees with you.

Good morning, Grog... I hope you're doing well. Thanks for the links! Ya know, I'm not sure we're going to learn to get along again. The Left doesn't want to "get along", they want it their way or no way and they are willing to burn the country to the ground to get what they want. I don't think most Americans realize how dangerous these people really are. Ya know, I grew up in a time when you didn't lock your doors. You left the keys in the car. You knew at least one neighbor who had your back. It isn't like that anymore. It can be incredibly frustrating watching the Far Left direct the narrative that is pushed every day in the media. Sadly, I believe that the Left is becoming what the Far Left is preaching. Conversation, listening and understanding, solving common issues... not so much. I'm trying to wrap my head around a lot of things right now. Crazy world. Stay safe. Peace.

Good morning, I'm well enough, and you're welcome for the links, sharing info on current events has always been important in my view, so we of like mind know what is happening.

I grew up with the same conditions, when the street lights came on, it was time to get home.

chuckling, or get the belt for being late. :)

Your assessment of the mindset of this current society we have is accurate, and has been for 2 or more decades, and this has been a deliberate transformation. If - BIG IF - term limits for the congresscritters had been made mandatory some years back, the approaching conflict may have been cancelled or delayed, but not enough people stood up in protest, and those who did were labeled and villified.

So, here we are. When will the balloon go up? I do not know, not being an inside deecee sycophant, and it's my guess that there are still minor events which need to happen before everything goes full potato. We will know when it happens. :)