The fall of Saigon... 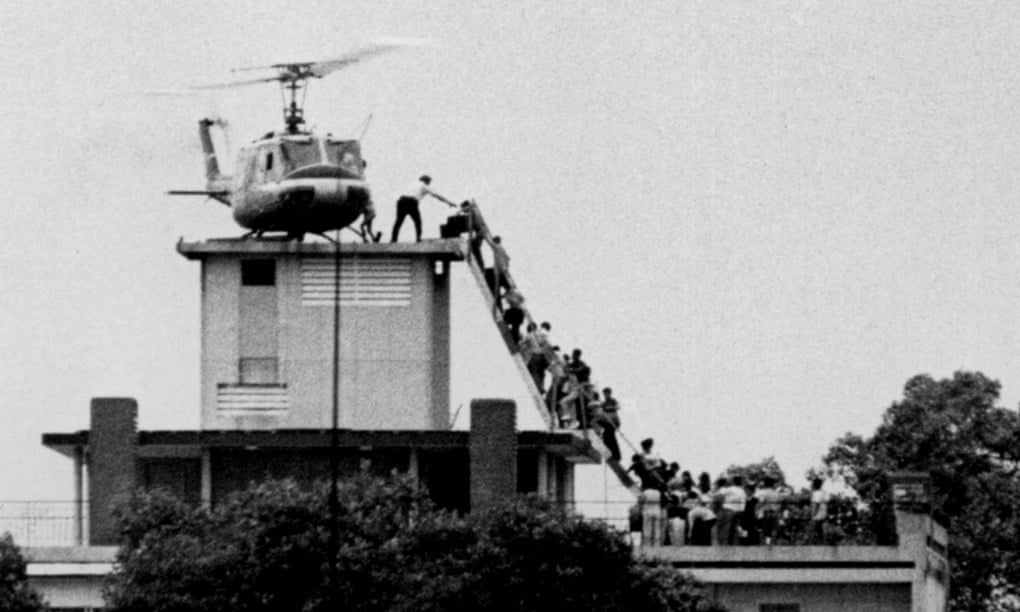 I remember this well...  I was stationed at Fort Hood, Texas on this day in 1975, having recently PCS'd from Germany...

I wonder why all the "important, influential celebrities" are threatening to leave for Canada if Trump gets elected? Why not Mexico?

Because they are fucking racists, that's why!  ;)

In lieu of flowers...

Churches in American have been overthrown from within and transformed into bastions of "social justice" with a relentless socialist undertow. The Gospel of Jesus Christ has been morphed into "Jesus the Community Organizer". Sixty-one years ago, John F. Kennedy warned us of this tactic.  ~~Will G.

"But in 'the stern encounter', in the moral struggle, religion is not simply a weapon - it is the essence of the struggle itself. The Communist rulers do not fear the phraseology of religion, or the ceremonies and churches and denomination organizations. On the contrary, they leave no stone unturned in seeking to turn these aspects of religion to their own advantage and to use the trappings of religion in order to cement the obedience of their people.

What they fear is the profound consequences of a religion that is lived and not merely acknowledged. They fear especially man's response to spiritual and ethical stimuli, not merely material. A society which seeks to make the worship of the State the ultimate objective of life cannot permit a higher loyalty, a faith in God, a belief in a religion that elevates the individual, acknowledges his true value and teaches him devotion and responsibility to something beyond the here and now.

The communist fear Christianity more as a way of life than as a weapon. In short, there is room in totalitarian system for churches - but there is no room for God. The claim of the State must be total, and no other loyalty, and no other philosophy of life can be tolerated."

The Devil is in the details...

"By calling attention to a 'well regulated militia,' the 'security' of the nation, and the right of each citizen 'to keep and bear arms,' our founding fathers recognized the essentially civilian nature of our economy. Although it is extremely unlikely that the fears of governmental tyranny which gave rise to the Second Amendment will ever be a major danger to our nation, the Amendment still remains an important declaration of our basic civilian-military relationships, in which every citizen must be ready to participate in the defense of this country. For that reason, I believe the Second Amendment will always be important."
JFK, April, 1960

The code is simple...

If Bruce Jenner can keep his weiner...

I wonder who in Downing Street briefed Barack Obama’s team on the wording of his friendly warning to the British. Somebody obviously pointed out that the population of this country retained a quaint obsession with the Second World War, and would therefore treat any reference to the glorious dead as irreproachable. So the President invoked the European graves of those American servicemen who died to protect – well, what exactly?

I thought it was the democratic values and reverence for national independence that Britain shared with the US. Did Mr Obama have any sense at all that what he was now urging the British electorate to accept was precisely the surrender of those sacred principles of democratically accountable government and self-determination for which the combined American and British forces had made their ultimate sacrifice?

Could this bizarre intervention have been more cynical or wilfully misinformed? In the end, it seemed to come down to trade advantages – to what might once, back in the day, have been called the global interests of US corporate capitalism. Mr Obama even made specific reference in his article in Friday’s Daily Telegraph to the importance of current negotiations on the Transatlantic Trade and Investment Partnership (TTIP), which would reduce barriers to US business interests in the European Union.
On the same day, 38 Degrees – a front group for the more proactive elements in the public sector unions – took out full-page newspaper adverts campaigning against the adoption of TTIP (“…no trade deal should give corporations more power than people”). If the Labour Left were not in such disingenuous disarray, they could be making a meal of this. In any event, unnamed US trade officials were being ominously quoted as saying that, in the event of Brexit, the UK would come very low on America’s list of priorities for new trade agreements. 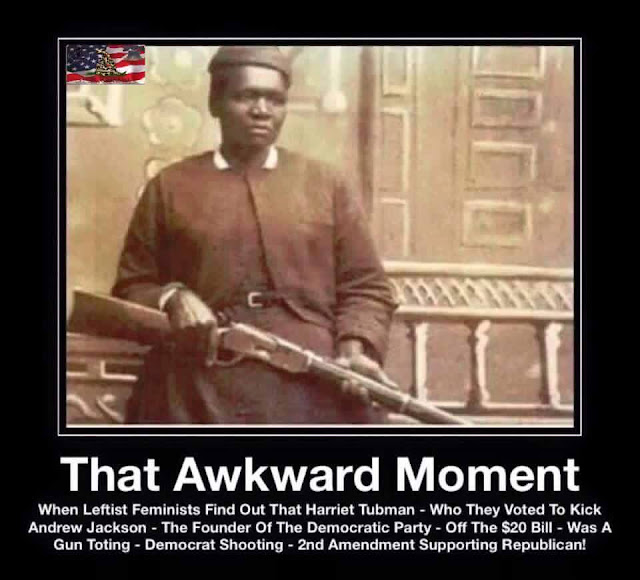 I suspect that a slight bit of artistic license was taken in creating the comments beneath this picture of Harriet Tubman.  Still, it seems to ring at least a little bit true...  :)
~~~~~~~

It has been pointed out that the picture above is not of Harriet Tubman, rather it is Mary Fields.  Another interesting personality, it seems.  Thanks, Anon.  ;)

"I grew up like a neglected weed - ignorant of liberty, having no experience of it."  ~~Harriet Tubman 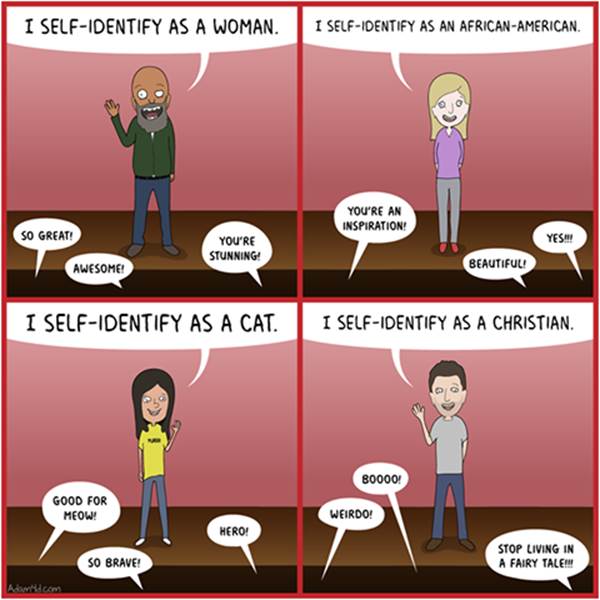 Or the ongoing destruction of conventional (traditional) society.

XX = Female.  XY = Male.  That is irrefutable settled science.  (Liberals love science, right?  At least when it matches their current agenda. {whatever that agenda may be at any given moment} If the science doesn't support their agenda they will simply ignore the science.)

It is that fucking simple.

What we are experiencing today is the direct result of a generation of parents who were either unwilling or unable to say "no" to an entire generation of children.  The effects of this abdication of parental responsibility will be long lasting and difficult to correct.
Posted by Blue at 11:16 5 comments: 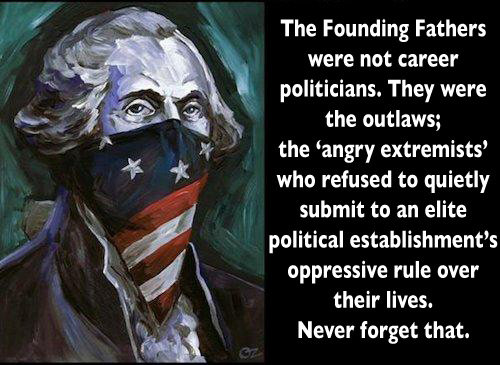 We all know how that ended...  America.  Land of the free, home of the brave.

There is this over at Generic Views...

He is, of course, right.

The owners of the country... 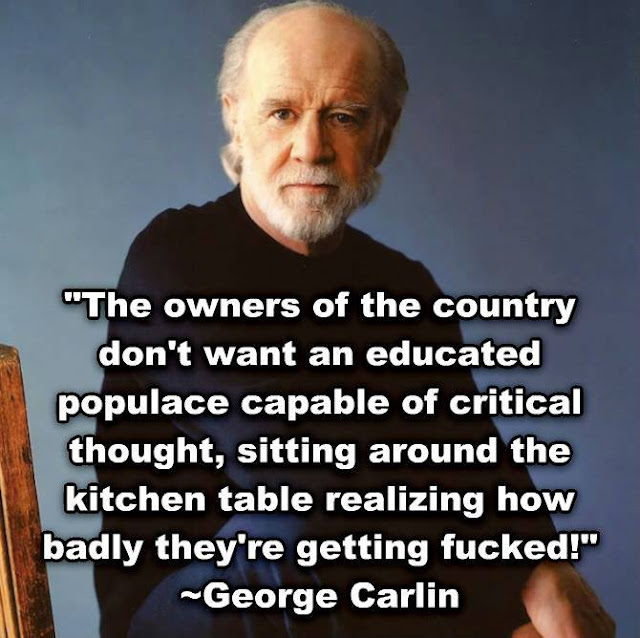 Some of you might argue that "the people" own the country.  You would be wrong.
Posted by Blue at 08:48 6 comments:

The way of the Progressive... 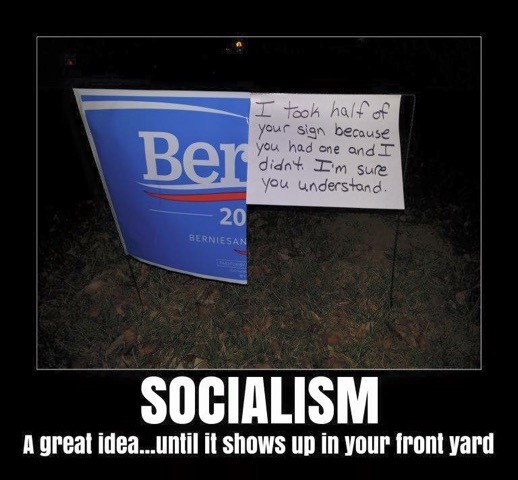 The Republican establishment, desperate to stop Donald Trump and Ted Cruz, is still working to nullify our vote, Judge Jeanine Pirro said in her opening statement on Justice.

“If ever there were a time to not take away our vote, it’s now – at a time when more people than ever are invested and voting,” said the judge.

“You want to keep your status quo – the one where one hand washes the other, and we pay for the soap.”
Pirro reacted to Karl Rove’s recent remarks, where the former White House Deputy Chief of Staff had said “a fresh face” might be needed to beat Clinton in November.

“You want a fresh face? Aren’t you the guy who kept bringing us one Bush after another?” said Judge Jeanine.

Ask not what your country can do for you...

Because she has never been arrested or indicted or charged with any crimes.  She is pure as the driven snow.  She is harmless and blameless in the minds of the Left...

Or, as Shirley Kay LeVan says on the Fb...

"Because no one is taking authority, we have no government anymore, they are all sitting around twiddling their thumbs and watching our downfall, we the people need to kick butt and clean house, get the fat cats out of Washington."

Who do you think they mean...?

I doubt that one became what the other was.  I think they were both liars to begin with.
Posted by Blue at 07:10 7 comments:

Integration is not the answer...

Obama and the European elites are constantly promising that Muslims will integrate into Western societies and there will be multicultural peace and harmony. It isn't working, it won't work, and it will never work.

"Sanctimony and denial won’t untangle this Gordian knot. No amount of NGOs will turn Islam into something else. Cultural integration won’t transform Muslims into non-Muslims. All it does is make them conflicted and insecure. And that is why it is those second-generation culturally integrated Muslims who go to bars, call themselves Andy or Mo, sell drugs, go to university, who take a detour into Syria and come back with bomb plans and big plans for transforming Europe into an Islamic state."

Probably the only real thing about these elections...  ;)
http://www.freestdcheck.org/
Posted by Blue at 09:55 No comments: