If you vote Hillary in...

She will say anything...

The FBI will investigate...

A beautiful, curvy, woman, stark naked, jumped into a taxi in Minot,
North Dakota. The taxi driver, good old Ole, an Old Norwegian man,
opened his eyes wide and stared at the woman. He made no attempt to
start the cab.
She said to him: "What's wrong with you honey? Haven't you ever seen a
naked woman before?"
Ole said "Lady, I'm not staring at you, I am telling you, dat vould
not be proper vair I come from".
She said:- "Well, if you're not staring at my boob's sweetie, what are
you doing then?"
Ole looked at her and said: "Vell, I am lookin and I'm lookin, and I
am tinking to meselfs, vair in da hell is dis lady keeping da money to
pay for dis ride?

Loving the Thelma and Louise reference.
Posted by Blue at 15:12 7 comments:

Because that's the way it works...

BREAKING: That Was Fast! Hillary Immediately Brings Disgraced DNC Chair Onto Her Campaign! 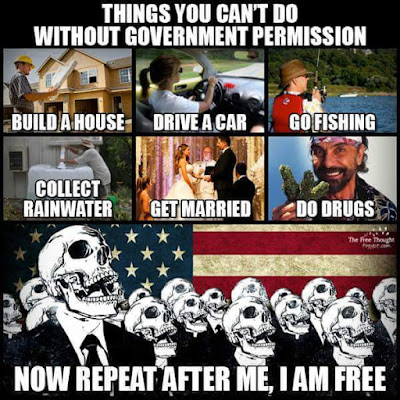 How will Democrats protect Americans from terrorism...?

WATERLOO -- A Waterloo man was shot and killed and two others were injured Sunday night in Waterloo.
Police report Otavious Donte Brown, 21, was killed after being struck in the chest by gunfire Sunday.
Brown was taken to UnityPoint Health-Allen Hospital where he died, according to Waterloo Police.
Two others, Dewon C. Campbell, 17, and Aundrey F. Roberts, 22, both of Waterloo, were also taken to Allen where they were treated and released with non-life-threatening injuries.
The three showed up at Allen around 5:50 p.m. Sunday, all with gunshot wounds, according to police.
Witnesses say the shots came from a green SUV heading north on Logan Avenue. The three victims were in a group of four people together outside in the 800 block of Logan.
Police say they have seized a vehicle involved in the incident but have not confirmed if there are suspects or any arrests in the incident.
That block has been investigated for shooting incidents before, most recently on June 29, when officers were called to the area for gunfire and found a shell casing.
Anyone with information about the incident is encouraged to call 291-4340.

My little town.  Stupid fuckers.  "Little Chicago" is our nickname because of all the ties to that city.  Folks send their kids here to live with Grandma and Grandpa or an aunt and/or uncle to keep them out of trouble.  LOL.  Serious business, man.  They really do.  Then they kill each other.  Here.
Posted by Blue at 13:25 5 comments:

You can't bomb an ideology...

When the government investigates itself...

Everyone loves a parade...

Either Clear Lake, Iowa's 4th of July parade or a parade in Stewartville, Minnesota.  He apparently was in both.  :)  Gotta love a parade.
Posted by Blue at 05:46 2 comments:

Which came first, the chicken or the egg?


The President is Responsible for the Assassination of Heroes

Black Lives Matter lies: The President is responsible for the assassination of heroes (White House/Pete Souza)

President Barack Obama is responsible for the assassination of the heroic police officers in Dallas, and he doesn’t hold that responsibility alone. Celebrities, politicians, and the news media all share that burden. When these people openly spread the false narrative that police officers are making decisions based on race, they are legitimizing the lies of Black Lives Matter and other agitators. This is a concept that should be viewed in the same light as nutjob conspiracy theories, and instead it is being acknowledged as accurate by the media and the people who control it.

On July 8th, the President made a speech, which included the following:

But what I can say is that all of us as Americans should be troubled by the shootings.
These are not isolated incidents. They’re symptomatic of a broader set of racial disparities that exist in our criminal justice system. And I just want to give people a few statistics to try to put in context why emotions are so raw around these issues.


According to various studies, not just one, but a wide range of studies that have been carried out over a number of years, African Americans are 30 percent more likely than whites to be pulled over.

Black Lives Matter lies: Hands up, don’t shoot? A DOJ report proves that this had no basis in reality. (flickr/Fibonacci Blue)

The easiest way to stop Blacks being hurt by Cops and to stop Cops being hurt by Blacks would be to simply stop policing areas where Blacks live and congregate...  Safer for everyone, right?  (snark)
Posted by Blue at 11:32 2 comments: