Trying to imagine a Conscientious Objector as CIC, sending our children off to die in other men's wars...  Oh, wait...  We have already had a draft dodger do that.
Posted by Blue at 08:24 2 comments:

Well, I guess Bernie took Oregon last night.  He needed Kentucky, too, but the Hildabeast took that.  Gonna be interesting.  Or not.  ;)

Playing out according to plan.  Maybe.
Posted by Blue at 05:41 3 comments:

Mogadishu became a political hot potato 20 minutes after the operation started causing Clinton to then sit on his hands and refuse to make good on his promise of total support while good men died.  She is no better.  They are evil.  Fuck 'em.
Posted by Blue at 20:47 3 comments:

Going down to Mexico...

When they were just cousins...

I read this morning that Hillary said she was going to put Bill in charge of revitalizing the economy if she gets elected.  Why?  Because Bill knows how to do that, ya know.  He is gonna fix things up with coal country.  Undo the damage that obama has done.  At least she said "if" she is elected, rather than "when".

I read yesterday that obamacare has grown the economy.  I'm guessing when Libs read that they will miss the part that it is 100% about increased premiums and higher, much higher, deductibles.   Fuck obama.
Posted by Blue at 11:47 2 comments:

Perhaps they already have?  I have no faith in the DOJ doing it, even if there is evidence to indict.  Whatever.
Posted by Blue at 07:14 2 comments:

When I was younger and more naive, I thought the media was honest.  I thought that they had integrity and that the threat of possible media exposure kept people honest.   I guess it doesn't work that way.  Not sure it ever did.
Posted by Blue at 07:05 2 comments:

I guess it's all in how you look at it.

Promise a man another man's fish...

Why do Liberals lie so much...?

On a sheep and mule ranch...

Why do Conservatives own guns...?

And their grandchildren are once more slaves...

A little light reading from The Tenth Amendment Center...

"None are so hopelessly enslaved as those who falsely believe they are free."  ~~Goethe
Posted by Blue at 08:56 No comments:

Today I had to go to Lowe's. As I approached the entrance, I noticed a female driver looking for a parking space.

I flagged the driver and pointed out a handicap parking space that was open and available. The driver looked puzzled, rolled down her window and said, "I'm not handicapped!"

Well, as you can imagine, my face was red! "Oh, I'm sorry," I said. "I saw your 'I'm Ready for Hillary' bumper sticker and just assumed that you suffer from a mental disorder."

She gave me the finger and screamed some nasty names at me. Boy! Some people don't appreciate it when you're just trying to help them...........

Racism at The Point...

Black Lives Matter at West Point.  Or Black Power.  Or Black Panthers.  Or something...  Plus a couple of white girls hanging on...  ;)

Seriously, these people cannot be leaders.  No confidence.  Expel them.  All of them.  Now.  Be done with it.  It is a cancer and it was caught early enough to be safely eradicated.  Maybe.

Do you suppose there will be any disciplinary action?  Would Whitey get away with the same actions?   Would you follow these people?

Perhaps I am wrong.  Perhaps there is no problem at all?  Perhaps this constitutes "good order and discipline" in the New Army??

The people have spoken... 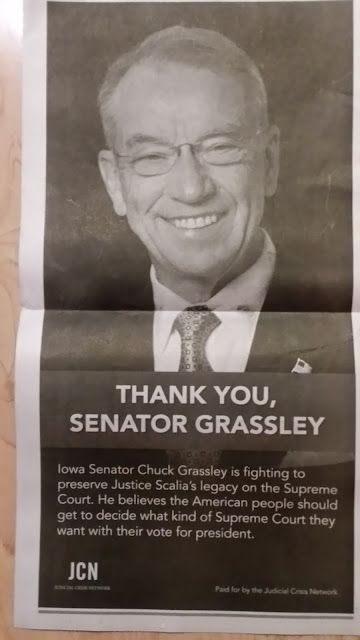 This was on the back page of the front section of our local paper yesterday.  Chuck Grassley.   My neighbor down the road.  Waterloo Courier.

Chuck is the fella telling obama and the Libs that "no, we aren't going to give you another Liberal on the Supreme Court just yet".  He wants to let the people decide after the next President takes office.  Good for you, Chuck.  Advise and consent.  I don't like the way it is being done, but hey...  So far it is working.  Desperate times, desperate measures...  ;)

The Libs, of course, hate it.  They claim that the people spoke in 2012 when they re-elected obama.  That is true.  But the thing that those same Libs forget (because it doesn't help their cause) is that the people spoke on this subject more recently when they elected a Republican majority to both houses of congress in 2014 with a mandate to stop obama.  Those bastards got elected and then forgot about the mandate that put them in DC...  Anyway...

There is, of course, the possibility that a Democrat could win that office.  And the Dems could win the majority of both houses.  Then the new President would get to choose.  And Ginsburg was born in 1933.  She won't be around forever.  I suspect that the next President could reasonably be expected to make 3 or 4 appointments to the bench.  Kennedy was born in 36, Breyer in 38.  Plus the replacement for Scalia.  If you need a reason NOT to vote Democrat, that is it.  Scary times...  I cannot imagine America surviving a packed Liberal Supreme Court.  The current crop of obama appointees have already shown that they are willing to get involved in social engineering and legislating from the bench.  And then there is "it's a tax, it stands" John Roberts...

Shall man govern himself...?

Dictator in a pantsuit...