What I don't understand... 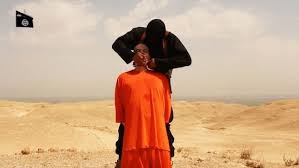 Foley above, Sotloff below...

The "executioner" uses his left hand to to hold the knife as he hacks through their necks, yet his pistol is holstered as if he were right handed.

I saw the Sotloff video yesterday before it was taken down.  I saw the parts of the Foley video that the media was willing to show.  I listened to both read their pre-written anti- American speeches...  I heard both of them admit that they accepted that they were about to die.

Both went to their deaths on their knees with their hands tied behind their backs.  They didn't fight it.  They didn't try to escape.  They read the propaganda that was placed in front of them, then they knelt while their heads were hacked off.

As I understand it, both showed Liberal bias in their reporting and both were openly sympathetic to the plight of the radical extremist Muslims who killed them.  (Feel free to correct me if I'm wrong about that.)

I also believe that both had experience living and working in the part of the world where they were kidnapped, both were adults and both understood the risks they were taking by doing what they were doing...

Beats me Blue. Perhaps they were drugged? I would think natural reaction to fight and struggle would set in as soon as someone started carving on them.

If they were liberals, well, heh.

It seems to me if you don't like snakes you don't go sit in a snake pit, right? At the very least they weren't very good decision makers.

Miss V. ... I thought about drugs, too, but their speech was clear and coherent. I thought that, perhaps, they were led to believe that it was all theatre and that they would be fine after the cameras stopped rolling. Who knows?

They may have been told it was just a propaganda video; they may have done this several times before with no harm done to them, only this time it was the real thing. And, of course, the penalty for not cooperating is is death or torture. You can rest assured that if they went out fighting, like that Italian did several years ago, the video would never have been posted.

I'm thinking that perhaps they were so indoctrinated while in captivity that they just accepted their fate. Perhaps they were tortured so badly over time that their psyche was completely ripped apart. That's my view. I have heard that psychological and physical torture is devastating on the mind.

Bob, Bruce... Thanks for your comments. Certainly something to think about.

If you blow up the pictures and look at the magazine in the executioner's pistol... It looks like it holds a kazillion rounds.

I know that doesn't mean anything. Just an observation.

You all do know that there is a historical precedence for this, and that this is nothing new.
Documentaries about the Second World War, and the holocaust, are filled with b&w movies filmed by German soldiers showing mass excutions, in which Jews(and others about to die) would dig their own graves, or run into large pits in a long column, past German soliders who are right in their faces and could be easily grabbed, attacked or disarmed. However, each and every time, knowing full well they are about to die no one ever tried anything. I am not arguing that it would have made a difference, just that it's nothing new.

cavmedic... one of my very early posts on this blog was about an experience I had in basic training back in 1972. It was a life changing event for me and, I'm sure, others in my basic training company. I will find that post and link to it for you.

cavmedic... here is the link.

Regardless if they were Liberals or not, they were OUR (US) Liberals. In the day - if anyone harmed one of our Citizens cosequences would have been immediate and far reaching. Now: we're going to "disrupt" them (?) and make dealing with this "managable". WTF, over. More over "winning their hearts and minds", we're now making our foriegn policy about "managing the situation". No wonder Putin laughs in our face. Blue, when will they issue this administration SPINES and B--ls? The policy should be: They maybe screw ups, but they're our scew ups and nobody toouches them but us! BTW - I will be booking the next pool party for the State Dept in Libya.

Hi Blue,
I don't get it either?? When I was in Uncle Sugar's Canoe Club if you were aircrew you got to go to SEER school. I didn't but know about the training. Perhaps these guys could have fared differently if they had gone thru some?? Just sayin?
Got Gunz??,
III%,
skybill-out

Same reason 3 out of 4 plane loads of people let their highjackers kill them all. They really did not believe it was happening to them. They had been trained that if they cooperate, everything would work out. The fourth plane didn't cooperate because they already hear what happened to the other planes.

In the 3rd world, the ass is always wiped with the left hand. That is why a handshake is always done with the right hand. If you're left-handed, you must inform the other person, and the handshake will be done left-handed to right-handed. In other words, the left hand is considered unclean and that's why it's used in the beheading...to add insult to injury so to speak.

MSGT Anthony... Thanks for sharing that.

In 1981, at Ft Benning, GA, an Israeli Major spoke to 250 of us young Captains in Building Snore (4). He had been an NCO in the Entebee Rescue. He said that EVERY Israeli KNOWS that they have a less than 50-50 chance of getting out of this situation alive. When the commandos told their citizens to hit the floor, two inadvertently stood up and were victims of friendly fire. However, when a terrorist tried to surrender, he too was shot. Why? Because he would have been just another potential reason for other terrorists to capture people for his rescue. Problem solved. Then he closed with statement: "You Amercicans will never win the war on terrorism because you are afraid of accepting friendly casualties. We Israelis live with the fact that we are all potential targets and must do whatever we can to resist or help resist. Maybe our death will save someone else." He got a polite appaulse. That was 33 years ago - I think he has been right ever since. The resistance on flight 93 was heroic and an example to us all - Do not go quietly into the night.

Thank you for sharing that. To some it will be inspiring!

Agreed Blue, but I have another point
about these 2 vids(which,I believe
are fake). If Isis wanted to shock
us, why would they NOT show the
actual beheading? No matter if the
gov says the vids are real, I don`t buy it, nor do I buy the one about the 9
yr old and the range instructor.

Watch pictures. Lines of prisoners just march obediently into desert to be shot and dumped in mass graves. WHAT? Sure if you fight you die. You are outgunned and outnumbered. But to willingly let a butcher march you to death. Back when I was a kid, a man forced 12 nuns in a room. He took them one by one and killed them. My dad, a WWII VET, said, that was just dumb. They should have jumped him. Twelve against one. Sure, a couple would die. But more would live. NEVER GIVE UP. WE KNOW THEY ARE DETERMINED TO KILL US. NEVER GO WILLINGLY. FIGHT UNTIL DEATH.

Scott... Thanks for stopping by and for taking the time to comment! :)

Some do, some don't:

These men knew they were dead. They had already accepted it. They read what put before them and hoped only for a quick death. There is a lesson there for all of us.

Lesson being; don't make it easy for them.

They were probably given a choice. Die painfully but relatively quickly, or resist and be tortured for days. or be advised their loved ones would be hunted and killed.
The response to your question indicates that perhaps we have not yet realized how brutal things can be- we need to go back a ways in time to understand-skinning alive, removal of body parts, impaling, burning at the stake, there are a host of torments that could and would be applied without the slightest hesitation-indeed, they would delight in it. Those men were in an untenable situation , and did the best they could-with the alternative of being in prolonged gibbering insane agony.