Mother Jones occasionally allows an "ideologically similar" entity to use their platform to reach out to people whom they believe can be made to get up off the couch and go out and make a difference.  This is one of those entities and one of those times.  It arrived in my daily dose of Mother Jones email this morning. 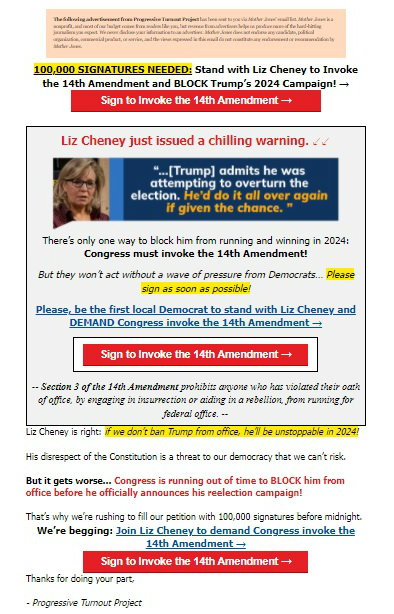 Second, they obviously do not care about the Will of the People.  They only care about the will of those people who entertain a Progressive ideology (or believe the same way they do).

Third, it is there for anyone to see that the ONLY goal of the Left is to prevent Trump being President again.  These people spent every single day for over four years attempting to overthrow a sitting President.  They talked publicly about it before he was elected.  They talked publicly about it after he was elected and before he was inaugurated.  They tried to prevent him governing while they were attempting to remove him from office.  Again, against the Will of the People.

This is what America is up against.  Fringes with a voice and assumed political clout.  Assumed clout, because no one is challenging them.

Were the protests of January 6th an insurrection?  Did those peaceful protestors arrive at the Capitol with the intention of overthrowing the government?  (That is the Leftist narrative.)  Who organized this attempt to overthrow the government?  Who funded it?  Who directed it?  Who was in place to take charge of the government once the "coup" was successful?  Who was going to lead the military?  Who was going to lead all of the different departments of civilian government?  Who was going to step in and lead all of the "alphabet" agencies, CIA, FBI, DEA, DOJ, etc.?  I mean, all of these folks had to be part of the insurrection ahead of time in order for it to succeed, right?  Was it expected to be a "peaceful" overthrow of our government, since the insurrectionists were unarmed and there were no military or paramilitary forces standing by to assume control and maintain order after the successful coup?

Anyway, if one is paying even the slightest amount of attention and is using the logical part of their brain, even a little bit, it is obvious that "all the parts" of the Democrat's narrative fail to make a whole.  Yet somewhere around 50% of America is buying the story.

All of this simply proves that Americans are willing to eat whatever shit they are being fed.

If you can find the time. and have the interest, search "Progressive Turnout Project".  Just go down the list.  ;)  (I think that the Left is better organized than the Right.  Just my opinion.  And they are more willing to play 'not nice')