"They want to end Medicare as we know it.  They want to cut Social Security on the backs of seniors.  They want to raise taxes on the middle class so that they can give bigger tax breaks to the rich.  They will cut funding for education.  He's part of the Radical Right and will cater to the Tea Party.  They'll cut Medicade.  They want to take us back to 1890."

They are screaming.  They are all saying the same thing.  So much so that one would think it was scripted.

The Left is going berserk!  I think that they are scared to death of Paul Ryan.  I'm loving this.

The quote from this morning's announcement that surprised me most?  The one from Rachel Maddow...

As expected, Harry Reid and Nancy Pelosi were shitting all over themselves.  Elizabeth Warren and Debbie Wasserman Schultz were sounding typically stupid.  And screaming.

I'm not a Romney fan.  Never have been.  I have to give him credit on this decision, though.  It's a good one.  Ryan could be a game changer.  He can articulate the conservative point of view with facts and figures and without hyperbole.  All the Liberals can do is repeat unfounded talking points in rebuttal.  This could get interesting. 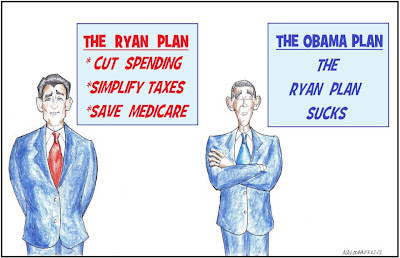 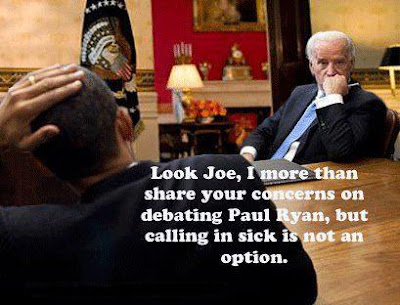 obama and his minions will have their work cut out for them.  Paul Ryan has something that they don't have...  Paul Ryan has a brain.
Of course the folks that are used to stealing getting the "free shit" have reason to be concerned.
Here is Paul Ryan's plan: see page 5 for synopsis
Stay safe.
Posted by Blue at 23:16

Before you start saying HALLELUJAH you might want to look at Ryan's voting record. This link provides a summary of some of his key votes. To say I am underwhelmed would be a gross understatement. I keep hoping for an act of God like a lightning strike as Obama and Romney are shaking hands during a debate so we can start the nomination process over. http://lewrockwell.com/orig13/aitken1.1.1.html

I keep hoping for an act of God like a lightning strike as Obama and Romney are shaking hands during a debate so we can start the nomination process over.

First off, Romney/Ryan is better for America than Marxit/Biden.

The whole Medicare thing is BS. Anyone who is 55 or older is not touched be Ryan's plan. Plain and simple.

The left is shtting themselve as Ryan can out devate them in a second. Biden vs Ryan is going to be shooting turkeys in a coop.

I cannot say I'm happy with either of these guys but this is who is on the ticket and there isn't a gotdmnn thing I can do about it.

I'd rather have these guys than the other option.

My only question is, why did they give me the option of finding democrats in my area? I praise the foresight that these idiots have given me.

Come collapse, I know who is my friend, hehehehe.

Thanks Bill for that link. Now I have something to show my husband, who thinks I'm nuts not to be all aglow about Ryan. ;)

Thanks for the input, folks.

Aitken says in the Rockwell link that Ryan's voting record "would not sit well with small government Conservatives". She is referring to the Tea Party, a group whose beliefs and desires I almost completely agree with.

Unfortunately, the Tea Party, as well as all "small government Conservatives", make up a very small segment of the electorate.

Fortunately, that small group is growing.

I think (hope?) that Romney/Ryan is a step in the right direction.

Like I said before, I'm not a big Romney fan. I do believe that he moved from "ever so slightly left of center" to slightly right of center. He has a way to go. Like it or not, most of America isn't ready for a reformer like Ron Paul. We aren't hurting enough yet.

The fact remains that we are almost 16 trillion in debt, almost 6 trillion of which has been added under obama. We will be almost 17 trillion in debt when the new fiscal year starts and another trillion dollars is added to the debt via the current real deficit. Its ugly. Very ugly. Somehow that debt has to be paid.

I believe that Jane Aitken's heart is in the right place, but she has an agenda. She hopes against hope that the Republican delegates will defect en mass and nominate Ron Paul. Ain't gonna happen. The delegates will (mostly) follow the script and Romney will be nominated. Its what the RNC wants and what the RNC will get. The best we can hope for is that a good platform comes out of the convention and that more true Conservatives are elected to Congress. As much as I'd like to see Ron Paul nominated and a whole bunch of Tea Part candidates elected to Congress, it ain't gonna happen. Baby steps. Patience. The first priority now has to be wresting control of the White House and the Senate from the Democrats.

Its going to take time.

Meanwhile, our children are still being indoctrinated by Liberals in our public school system. Correcting that problem has to be a very high priority. Its a large part of why we are where we are at today. A "brain washed since childhood" electorate receiving "free stuff" will almost always vote for those making the "free stuff" happen.

I'd be willing to bet that if Romney wins the election and we get through to inauguration day and transfer power to him, and if things start getting even marginally better (better is an individually subjective concept in this case), that the folks who consider themselves Conservatives will pat themselves on the back for doing such a good thing and will sit back and let it all start to fall apart again. Any takers? :)

BTW, Bobby Jindal was in my little town campaigning for Romney this afternoon. obama is here tonight. Big deal, eh? :)