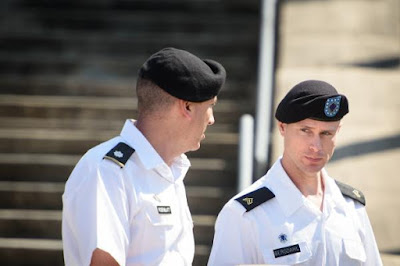 FORT BRAGG, N.C. — The Army general who ordered Sgt. Bowe Bergdahl's court martial testified Wednesday that he wasn't swayed by negative comments from a powerful U.S. senator, saying that he takes his duty "very, very seriously."
Gen. Robert B. Abrams, the four-star head of U.S. Army Forces Command, found himself in the unusual position of defending his objectivity against a defense effort to remove him from the case. Abrams referred the case to a general court-martial rather than a lower-level tribunal in December, weeks after U.S. Sen. John McCain indicated there would be repercussions if Bergdahl weren't punished.
Wearing a short-sleeved white dress shirt and blue pants, Abrams asked a prosecutor curtly "Where do you want me?" as he strode toward the witness stand.

I hadn't heard anything about Bergdahl in awhile.  Apparently the case against him continues.  In spite of people who should know better running their mouths...

Fuck Bergdahl.  I pray that he is found guilty of all charges and that he spends the rest of his life in a military prison.

Eddie Slovik received more for less.
Posted by Blue at 16:55

My bet is that the Commander in Chief will simply make it all go away with the stroke of his pen and a few phone calls. The whole system is morally bankrupt and emits a festering decayed odor. Several months later, Sgt Bergdahl will quietly commit suicide somewhere, by shooting himself 27 times. RIP!

slap on the wrist followed with promotion

the whole system is nuts

Wildflower - he has ALREADY been promoted - 2 pay-grades IIRC (from PFC E-3 to Sergeant E-5).
There is a slight possibility that there are still some general officers that are true to their oaths and part of the reason this is being dragged out so long is that they KNOW that barry will pardon him if the proceedings are finished prior to his departure from OUR White House. At least I'd like to think there are still men and women of conscience and integrity in the ranks, but then again I've been retired for about 6.5 years so things may have gone even further downhill.

He needs to be tried, found guilty, tied to a fence post and shot. The ghost of Eddie Slovick demands it.