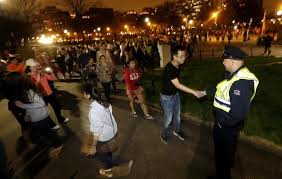 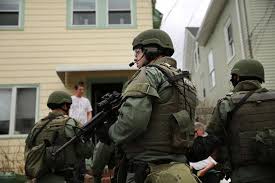 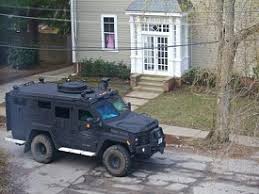 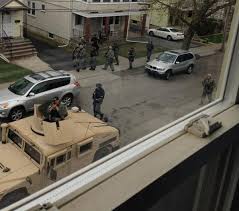 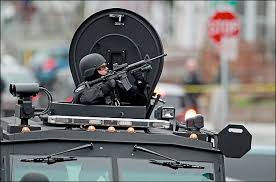 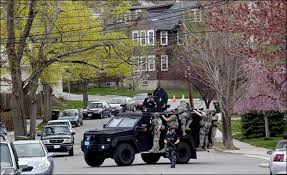 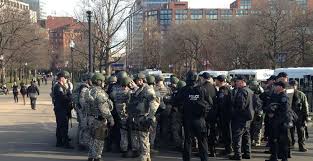 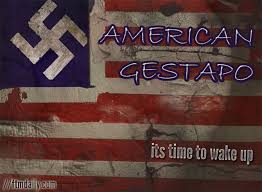 
I was reading over at Curtis' Place this morning and had a moment of clarity.  I posted a comment on his blog, which in turn became this blog post...

~~~~~
.
And none of the hundreds (perhaps thousands?) of militarized "cops" who were involved in this "operation" cared that they were violating the unalienable constitutional (and human) rights of the citizens.

The fact that these cops were violating the God given rights of their fellow citizens meant absolutely nothing to them.  That thought never even entered their minds.  Empathy for their fellow citizens has been erased from their psyche.  They are sociopaths.  Do the militarized forces that exist today draw sociopaths to their ranks, or do they create sociopaths?  Does it matter?  Can any individual become a member of one of these forces today without being or becoming a sociopath?

And the people...  The people who allowed themselves to be ripped from their homes and herded down the street like cattle...  Like the German Jews to the concentration camps, or the Russians to the Gulag, or the Cambodians to the Killing Fields.  Or the American Indian at the hand of the white man.

This is no different.  It has happened thousands of times throughout history.  This was simply a trial run.  A test.

It has to start somewhere.

Now the Powers That Be know how far they can go.  The PTB now know how much evil the people will tolerate.  The PTB know that they are now free to go "all the way" without resistance.  They know that their Jack Booted Thugs, their minions, will be able to return safely to their families at the end of their shift and that the citizens will do whatever they are told to do.  Its important that the JBT are able to return home at the end of their shift.  Knowing that they will be safe at the end of the day is what keeps them in the fold.

We have turned that final corner as a nation.  We have taken the final step.  You can deny it as much as you want to.  You can try to rationalize it.  You can even get comfortable in your own mind believing that its an aberration, that things will settle down and get back to "normal".

But, in the deep dark recesses of your mind, if you are honest with yourself, you know that this is the new normal.   Its the way it is. It ain't a gonna change anytime soon.

The one thing that we do know for sure is that actions such as these, the Nazis, the Soviets, the Khmer Rouge, all of them... they ultimately fail.

In the end, the vast majority of human beings Americans do not want to be treated like animals.  The human American spirit is indomitable.  Even the Progressives will come around, eventually.  They are the "useful idiots" and they have no idea what they're doing or what they're in for.  They are the dolts that are necessary for this current evil to gain a foothold.  Their eyes will soon be opened.  Conditions such as what we are about to experience defy the human American spirit.  It is ultimately a part of the human American condition to throw off the chains and live free, as an individual.

What makes the PTB think that this time will be any different?  What makes them believe that they can succeed where other despots have failed?  Quite simply, it is their arrogance and their ego.  It goes no deeper than that.

Great post, brother.
I agree 100%.
I have said much the same thing, but not quite as eloquently, at a site for Marines and former Marines.

I was mocked by a few of them for being a crazy Molon Labe, from-my-cold-dead-fingers type of asshole.

Buncha statists up in this MFer...

PS-for a real kick in the teeth, check out this thread on AR15.com.

Zoomie... I don't care if you are a crazy Molon Labe, from-my-cold-dead-fingers type of asshole. There are a lot worse things that you could be :)

Plus, I've met you, face to face. We have shaken hands. You are alright in my book. Even if you are an asshole.

Some of the comments on that ARFCOM thread just prove my point.

"He wasn't scanning with a rifle optic. he was covering a potential threat in a window pointing something at him (camera).

When they rolled down the street they told everyone to stay away from their windows. At the time it was believed the suspect may have forced his way into a residence.

If an idiot decides he needs to ignore their warning it is his right. But don't whine when you get covered down on.

No different than if he decided to walk out his front door and point a unknown object (camera) at the officers."

It concerns me that the author of the above comment believes that a competent officer can't tell the difference between a camera and a gun. They want total compliance to a questionable order. (The order to lockdown, or whatever you want to call it. Mere semantics)

I would never suggest that all cops are sociopaths or psycho or even just a little bit crazy. I know that the vast majority are good people trying to do an extremely difficult job in a professional manner. I also know that they are human and are subject to the herd mentality just like anyone else, though with guns and explosives and stuff. That makes them potentially very dangerous.

I think that the militarization of the police forces is a dangerous thing. These LEOs are trained to act like soldiers in a war zone.

They are in the towns and cities of America. I think that Law Enforcement went over the top in Boston.

Law enforcement officers acting like this in a city in America scares the hell out of me. I don't like being scared.

It's that old Communist "the ends justify the means" mantra.

Sorry to have to say it boys and girls, but I expect them to show a little restraint when dealing with the innocent citizens and the Constitution that they are sworn to protect and defend. The end DOES NOT justify the means. We still live under the rule of law and, in my opinion, the rule of law was thrown out the window in the aftermath of the bombings in Boston.

You be da Man, Zoomie.

It's that old Communist "the ends justify the means" mantra.

Sorry to have to say it boys and girls, but I expect them to show a little restraint when dealing with the innocent citizens and the Constitution that they are sworn to protect and defend. The end DOES NOT justify the means. We still live under the rule of law and, in my opinion, the rule of law was thrown out the window in the aftermath of the bombings in Boston.

Be glad you don't live in a big urban area. If you do you'd be well advised to move the hell out. Urban centers will be the new lock down facilities...you just witnessed the "set up"...aka Boston. Frightened sheep massed in concentrated locations.....you'd better get used to it if you live in a city....you ARE going to be locked down repeatedly!....zero rights. And you've bought it upon yourselves....hope you all feel safe. Enjoy!

It reminded me of when I was in 8th grade and a classmate brought pictures to class that his parents had taken while they were in Prague for vacation...of the Soviets rolling their tanks down the streets of Prague...I remember everyone being stunned and sober, even the teacher. My, how things have changed.
Miss V

I wonder how many people across the world watched the Big Show go down in Boston and wondered "WTF is going on in America"?