In the aftermath of Ferguson... 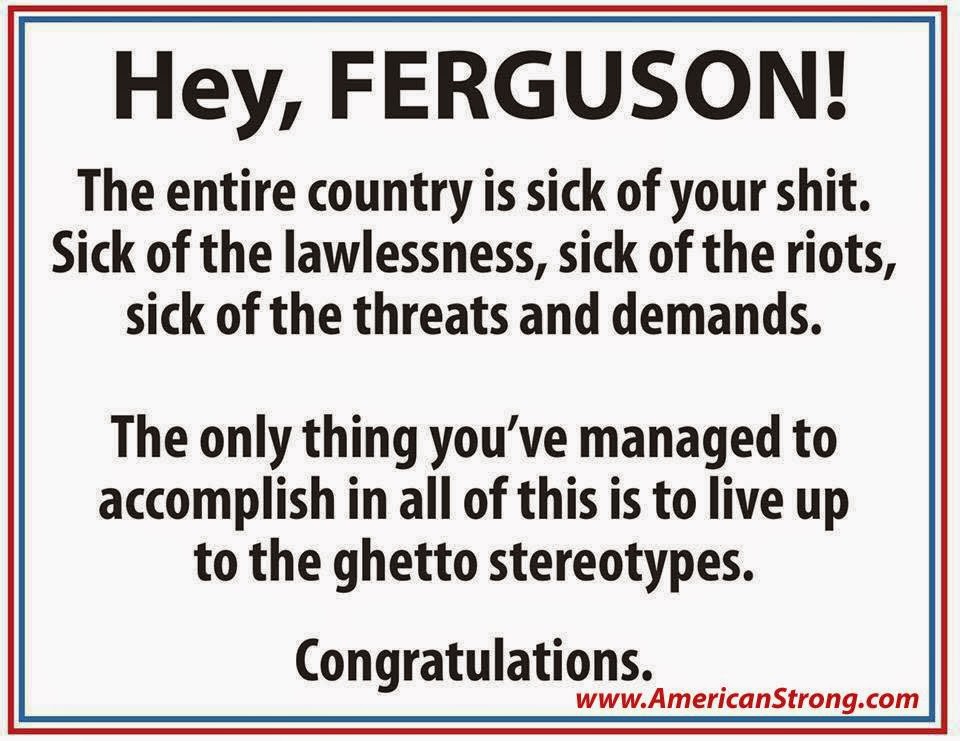 I tried not to involve myself in this.  I really did.  Then I made the mistake of watching it unfold on CNN last night.  Some of their reporters were doing all they could to incite these animals to riot.  I believe that it was going to happen anyway, but I think charges should be considered against some of Anderson Cooper's co-workers.  They yelled "fire" in the crowded theater...  Stupid fuckers all around.

Updated:  But still...   In all honesty, I know that you shouldn't blame the cops or the media or the National Guard for Ferguson. Blame the people who made the choice to burn their city down.  I don't know if there is any correlation, but these are the same "low information" voters people that the Democrats try so hard to get to go to the polls to vote for...  Democrats.
Posted by Blue at 05:34

Someday there's going to be a last race riot.

The conclusion is not a happy one.

I predict it's either going to make blacks yearn for the happy go-lucky days of Jim Crow or cause neo-nazis to remark, "wow, that was harsh!"

And nobody will really care because it will be over for all time and everyone will know it's done for good.

Some of us will weep because it could have been averted, but were ignored because personal responsibility is "racist."

I'll show you! I'm gonna burn down my own neighborhood businesses after I've robbed / looted them. This will deprive my fellow "oppressed neighbors" of jobs, food sources, clothing, etc. THEN - I'll blame "The Man" for driving me to this point. This pattern happened in the 1960's and 70's. I KNOW nobody was really aurprised. Just ring the area and let them burn and kill each other without leaving the ring. Like a fire it will burn itself out and the area can be paved over for a parking lot. (That'll show you.) Because Brwon was a thug anyway, he'd be proud.

"Burn the bitch down!"
http://news.yahoo.com/michael-brown-stepfather-burn-this-down-ferguson-video-182317962.html