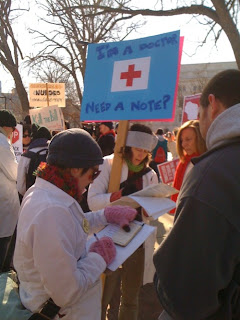 Thanks to lefan-o-rama.tumblr.com
Consider that these teachers in Wisconsin are calling in "sick" from work.  Volunteer doctors have set up shop at the protest site to issue fraudulent "sick slips" to these people so that they will be excused from work without disciplinary action being taken against them.  (Notice how the Liberal doctors and Liberal teachers stick together and lie for each other.  Sheep)  Not only are they not doing the jobs that they are paid to do, they are lying about the reason they aren't at work in order to be paid and to escape disciplinary action while playing hookey protesting.

I gotta tell you, these are the kind of upstanding people that I would want teaching my kids.   Can you say selfish?   Unethical?

These are people placed in a position of trust who lack the moral convictions to tell the truth about what they are doing.  They are willing to leave their jobs, to desert the students whose education and well-being they are charged with, to lie about where they are in order to protest for something they "believe" in, but they aren't willing to suffer the consequences of their actions.  I'm impressed with the example they are setting.  Not!  Tell me again please, why do we teach our children to respect their teachers?

I have no respect for these people.  None.  They make me want to vomit.

They are the living definition of the modern Liberal.  I hope that the parents of their students and the taxpayers that pay these peoples wages let them know, in no uncertain terms, that what they are doing is selfish and unacceptable.

I hope that the people of Wisconsin will rise up and see these Liars for what they are...  Liberal "elites" sucking at the taxpayers teat.

They are proving that self-intrest and self-enrichment at the expense of the taxpayer trump the responsibilities and duties of an otherwise "honorable" profession.

In our new Liberal world there are no consequences, there is no requirement for personal responsibility, and there is no accountability for your actions.  That is, if you are a Liberal.

The fact that obama and assorted other Liberal elected officials are openly supporting these liars speaks volumes about their credibility and about where their loyalties lie.  Hint: it isn't with the "little people" of America.

In their minds we have already been relegated to the ranks of the Proletariat.

My favorite article on this fiasco so far.

'Volunteer doctors'... umm, and we trust these lying sonsofbitches, too? Just goes to show how hypocritical the hypocratic oath is.
I wonder if there's some way to get the names of these 'doctors' and publish them... c'mon guys, help me brainstorm here...
Shy III

@Shy Wolf - Breitbart got a permission slip and the name of the doctor was already published. Try Gateway Pundit - I think it's there.

Blue - you can bet your bottom ass dollar the kids have been sitting home on their computers and know exactly how their teachers have been acting. Just wait until they all meet up in the classroom again. The teachers will have no control since the kids already see them for the hypocrites they are.

This whole thing is so completely disgusting it makes my blood boil! So glad you're my new brother since my "old" brother is no doubt 100% on the side of the teachers. Fool! Hard to believe we had the same parents.

Thanks for the kind words

I'm honored to be your "new brother".

I hope and pray that Governor Walker doesn't back down. This same issue will be brought up in the legislatures of several other states, including Iowa, in the next few weeks.

Perhaps this is the turning point?