They're tired of the tyrant.... 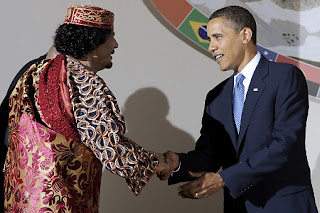 Moammar Gadhafi, the baddest of the Middle East's badasses for the last 40 years, has left the building....

Military members are leaving their posts.  Civilian "volunteers in white vests" are guarding the border checkpoints.

Libya's deputy ambassador to the U.N. has resigned his post, saying he sides with the people.

Just last Friday Gadhafi said that "They won't take over here like they have in Algeria".  By Saturday the Libyan Army had killed at least 200 protestors.  By today Gadhafi had gone into hiding.

Remember when, after the Lockerbie bombing, Ronnie Reagan sent F-111s to bomb Libya?  Scared the crap out of Gadhafi.  Killed one of his kids.  Certainly got his attention.  He was pretty quiet for the longest time.....  I miss President Reagan.

It seems like the entire Middle East is in turmoil these days.  The Muslim Brotherhood has changed it's mind and is now apparently going to get involved in politics in Egypt (I know, big surprise, huh?).  Iranian warships are passing through the Suez Canal today for the first time in 32 years.  Israel is watching them closely.  ;)

I'm not sure what the involvement of the U.S. is right now, if we're involved at all.

I wonder why we haven't heard much about Anderson Cooper's ass whoopin' in Egypt at the hands of the Muslims?  Or Lara Logan's "brutal" sexual assault at the hands of Muslims in Cairo?  Maybe there is more being reported in the MSM than I am aware of?  They're keeping the riots in Iran kinda quiet, too.  (WHOA!  Lightbulb coming on moment!  Perhaps it isn't being heavilly reported because it would possibly portray the perps in a bad light?)

At least Governor Scott Walker of Wisconsin is standing his ground in the face of obama and the DNC, SEIU, Nancy Pelosi backed protests in Madison.  I wish him the best.  The man has balls.

The unions were complaining yesterday about Governor Walker receiving a $43,000 campaign donation from the Koch brothers.  They failed to mention how much the unions gave his opponent in that election.  Weird how that works, huh?  A few months ago they were screaming that the SCOTUS had decided that businesses could contribute big money to campaigns.  They didn't mention that the unions could (and did) do the same thing based on the same decision.  Ahhhh well....

Change is in the air all over the world.  Good or bad?  I dunno, probably a bit of both.

The fact that the people in these Mid Eastern countries are standing up to overthrow "tyranical" regimes, right or wrong, gives me hope....  Will they replace bad with worse?  Who knows?  Popular self determination.

First one, then another, and another....  Who knows how far it will go?

It amazes me how quiet the U.N. has been.  Weird.

Somehow, I don't think we're getting the whole story here.   Somehow, I think that our biased Liberal media tells us only what they want us to know.  Or what the people pulling their strings to make them dance want us to know.  You get the picture....  :) 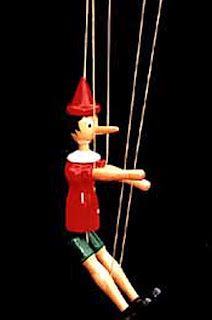 it can happen anywhere. ;)

You're a good man, Brock, and sharp!

With all our attention being focussed on the WS incident, and now Indiana as well, my mind keeps telling me to look in the shadows- "What's going on I can't see? What's happening behind me while I'm lookng ahead?"
Just sayin'...
In the meantime, I'm keeping my hands awfully close to my weapons.
Shy III
wv: 'trappine'... makes you wonder.