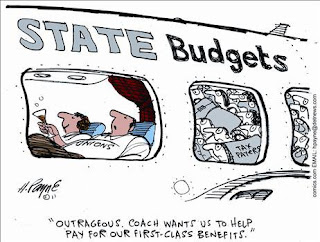 Thanks to H.Payne
So Rahm Emanuel won the mayoral race in Chicago....  Is anyone surprised?  They have to maintain a certain level of corruption, I guess.

Protests against public employees unions spreading out across the country from Wisconsin?  The unions may make a lot of noise but they are on the decline in America.  The People are starting to figure out that it's expensive and selfish and that "it just ain't right"!  Kudos to TL Davis for his participation in the protests out west yesterday.  He's on the "right" side.   Similar rumbles and grumbles in Iowa, Indiana, Ohio, Tennessee....  The SEIU and 1000 union supporters faced 100 Tea Party supporters in Des Moines yesterday.  The proposed legislation went forward for debate, anyway....  :)  Public Employee Unions have cost taxpayers a lot of money and the taxpayers are starting to figure it out!

Keep your emails and letters of support going to the governors and legislators who are forcing change.  It appears that "the silent majority" are starting to find their voice!

Americans are being evacuated from Libya.  Haven't heard much out of Hillary or obama about the "goings on" over there.  Not really surprised, I guess.  They're too busy supporting their money train union buddies here at home.  It's all a part of the plan, ya know.  The plan that appears as though it may be falling apart.

Can't think of anything else to mention this morning.

"Certain level of corruption". That describes it perfectly.

We can only hope it's falling apart.

But, then again Obama is directly involved, so maybe his touch-of-death will keep working in our favor.