What happens if things get out of control in Wisconsin?  Who will be blamed?

It's a powder keg just waiting for a spark....

Any President with half a brain would be working quietly behind the scenes to gather enough accurate information regarding "the goings on" prior to opening his mouth and commenting about it.  obama just can't get past his community organizing days and his socialist origins....  He's already opened his mouth, adding fuel to the fire.  He said that what the Governor and the Republicans in the Wisconsin legislature are doing seems like an "assault on unions".

Someone needs to tell obama to shut the fuck up and start acting like the POTUS (something he has failed to do since being elected).  The situation in Wisconsin is a state issue.  It requires no involvement from obama or the federal government at this point in time.  I guess that for obama it goes back to the philosophy of "never let a good crisis go to waste".

obama is an agitator.  It's what he's good at.  It's where his experience is at.  A street corner thug.  Actually, a step below a street corner thug.  He's the guy who spews the rhetoric that gets the thug riled up, then stands back in safety and watches as events unfold.  An instigator.  No more, no less.

Remember Ronald Reagan and the Air Traffic Controllers Union?  They went on strike.  He told them to be back to work at a very specific time or face termination.  They tested President Reagan.  They miscalculated.  He fired them.  I miss President Reagan.

The left obviously has the media on their side.  Huffpo and others are definately putting their spin on the events in Wisconsin.  Their reporting is so "out there" that you'd hope anyone with even the slightest modicum of common sense would see it for the hyperbole that it is.

Remember a few months back when Sarah Palin used surveyors symbols on a map to point out the areas of the country where Conservatives had an opportunity to gain seats in the House and Senate?  Remember how the Liberals screamed that the images were "crosshairs" targeting Democrats?  It led them to blame her for the tragedy in Tucson within minutes of the shootings.  That one backfired on them, too....

What do you think about this? 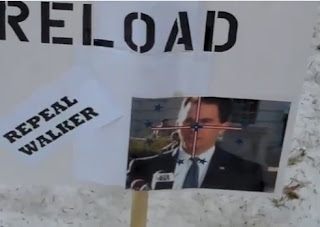 Nothing provocative about this, eh?  LOL.
Interesting.
This is from the people who know better than we do how our children should be raised.  The same people who left their jobs as teachers and pulled the children that they were responsible for out of school and drug them to the Capitol in Madison to be used as props in their demonstrations.

How about this one? 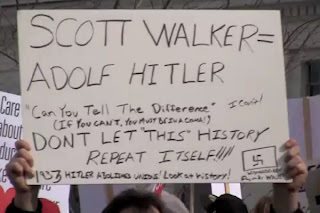 It's not Scott Walker who smooth-talked his way into the highest office in the land like Adolph Hitler did, boys and girls.  Nope.  Not Scott Walker.  If you want to draw parallels between Hitler and a politician in America today who rose to power like Hitler did, I think you'll have to look a little further up the food chain to find the example that you seek.  All it takes is a bad economy, some vile rhetoric, a few lies, an insatiable lust for power, and a whole bunch of really stupid people to elect someone like Hitler to destroy a once great nation.

I sincerly hope that things settle down in Wisconsin without violence.  The fact that the unions have bused people in from other states to join them in their protests should give you pause....  The fact that obama is inciting them from the sidelines disappoints and scares me.

My wife's family is from Wisconsin.  Both of her parents and all of her aunts and uncles were born there.  I considered moving to Wisconsin after I got out of the Army but decided against it simply because they are not a "Right to Work" state.  Put simply, that means that if the workers at a company in Wisconsin are represented by a union and you take a job with that company, you are required by law to join said union.  Personally, I prefer to speak for myself.  I don't need a union to tell my employer whats good for me and what isn't.

T.L. Davis has some thoughts on these things over at TL in Exile.  Go read them.

The governor mentioned yesterday that he was balancing the budget and suggested that Obama do likewise, another words, butt out Hussein.

Right on Bro! Obama should get his facts straight or keep his trap shut!

I think Walker actually cares about the people of Wisconsin. Pretty sure obama doesn't.

The thing is, I'm sure the POSPOTUS is very aware what's going on and why- and is still instigating and exacerbating the situation with his thugs- honest, there's no way he can't know. And he has absolutely no leg to stand on: he's committing treason by his very actions. Now, what the fuck are we people going to do about it? Who's got the balls to open the ball?
Shy III

A great post, Blue. Obama and his thugs are going to pull out all the stops. If they can get the governor to back down, then they can do the same thing in any other state that tries to get a handle on their bureaucratic costs.

I like your blog,Blue. I'm going to add it to my blogroll. Keep-up the great work!