A picture from Cousin Michael... 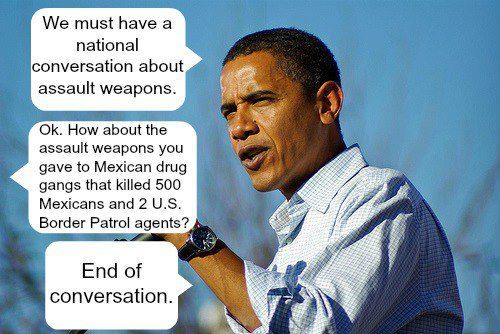 An article from the NYTimes via David...

After Talking It Up to Appease Their Donors, Democrats Abandoning Assault Weapons Ban?
WASHINGTON — While President Obama pledged to crack down on access to what he called “weapons of war” in the aftermath of last month’s schoolhouse massacre, the White House has calculated that a ban on military-style assault weapons will be exceedingly difficult to pass through Congress and is focusing on other measures it deems more politically achievable.
As a task force led by Vice President Joseph R. Biden Jr. readies recommendations on reducing gun violence for delivery to the president next week, White House officials say a new ban will be an element of whatever final package is proposed. But given the entrenched opposition from gun rights groups and their advocates on Capitol Hill, the White House is trying to avoid making its passage the sole definition of success and is emphasizing other new gun rules that could conceivably win bipartisan support and reduce gun deaths.
During a day of White House meetings on the issue on Thursday, including one with the National Rifle Association, Mr. Biden focused publicly on universal background checks for gun purchases and the need for more federal research on gun violence. In 15 minutes of public remarks, Mr. Biden made no mention of curbing the production and sale of assault weapons, even though he was a prime author of such a law that passed in 1994 and expired 10 years later. Both he and the president say they strongly support an assault weapons ban.
But Mr. Biden noted that his former colleagues in the Senate have long been “pretty universally opposed to any restrictions on gun ownership or what type of weapons can be purchased.” He said they now seem more open to limits on the purchase of high-capacity magazines.
A spokesman for Mr. Obama said later in the afternoon that the vice president’s remarks merely reflect a desire for a broad approach to gun violence.
“President Obama has been clear that Congress should reinstate the assault weapons ban and that avoiding this issue just because it’s been politically difficult in the past is not an option,” said Matt Lehrich, the spokesman. “He’s also stressed that no single piece of legislation alone can solve this problem, which is why he has asked Vice President Biden to explore a wide array of proposals on topics ranging from gun laws to mental health to school safety.”
Read the rest here...

I'm not sure how much of the "Gun Control" rhetoric coming out of Washington is serious and how much is political blow meant to appease those who want more of it.  A large part of it is, no doubt, political posturing to make people believe that the politicians care.  I believe that many of them have spent far too much time in D.C. and have evolved into sociopaths incapable of caring.  The only things that they care about are the next election and their quest to perpetuate their comfortable lifestyle and to maintain their power.

I don't doubt they'll try to impose new rules and restrictions on the law abiding gun owners of this country.  I'm just not sure how far they'll get with it.

Even Bill Clinton admitted that the '94 ban was the reason the Democrats lost so many seats in congress after it was imposed.  They all know that the ban did nothing to slow violent crime.  It was a feel good measure had little effect on a gullible public.  I hope that that knowledge will color their debate and their votes this time around.  The backlash from the American people has the potential of being severe.

Chicago now has the distinction of being the Murder Capitol of America.  By the admission of  law enforcement and the Chicago mayor's office, 80% of all murders committed in that city are gang related.  I don't think that anyone would try to tell you that any gun control measure will inhibit the ability of gang members anywhere getting guns.  If they do tell you that, you can be sure that they are either lying, or they are delusional.

I know that I'm preaching to the choir here when I say that the only people negatively affected by gun control rules and restrictions are law abiding legal gun owners.

All of the politicians involved in proposing or supporting gun control have the same data available to them as you and I do.  They probably have more, actually.  Common sense dictates that legal ownership of firearms in any form is not the major problem.  Law abiding gun owners could possess armor, artillery, and heavy machine guns, as well as piles of ammo to go with them, and it wouldn't affect the crime rate.

The people attempting to control our access to weapons and ammunition know that it will have absolutely zero affect on gun crime, yet they insist on pushing forward with their plans.  Why?

Because sometimes bad people do bad things?   Unfortunately, that is human nature.  It's not going to change because someone passes a restrictive gun law.

Personally, I think that it has more to do with "An unarmed populace..."

I believe that most of the rhetoric is just that, rhetoric.   I don't believe that most politicians have the stomach for it.  If they truly believe that any more gun control restricting the rights of law abiding citizens will be successful in lowering violent crime rates, they lack the mental capacity to be in the positions that they are in.  They should probably be institutionalized.

"Assault weapons" will bear the brunt of their attention, even though "assault weapons" are the least used firearm in the commission of crime in this country.  Their story is a lie.  It has been from the beginning.

All they need to succeed is an uneducated, gullible audience.

I've been debating the grabbers for over twenty years. It was obvious from the get-go that there is no need for a dialogue.

There exists no single argument/fact you can provide that changes an asinine mind.

We need to use the only means in our possession to remedy the situation.