Oh my! How times have changed... 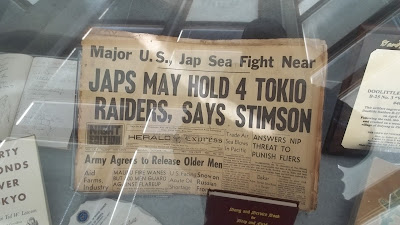 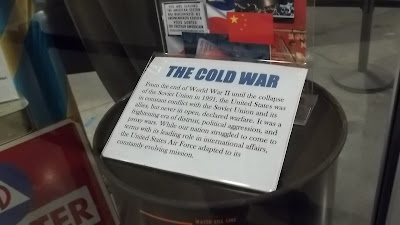 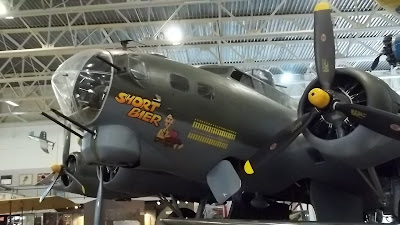 I spent the morning and a bit of the early afternoon at the Hill Aerospace Museum at Hill AFB here in Utah.  I love me some aviation and aviation history.  A year ago, the Missus and I spent the better part of a day at the National Air Force Museum in Dayton, Ohio.

Look at the pics.  I can't imagine a newspaper today using non politically correct language like Nips and Japs, such as the newspaper shown above.  Even the term "older men" probably wouldn't be used today.

Not sure how well you can see the nose art on the B-17.  It is a picture of Hitler sitting in a casket with his feet sticking out the end.  We would be respectful of him today, lest we offend our enemies, or worse, a citizen.

I included the Cold War picture simply because I served for 7 1/2 years during that "war".  Over 5 of those years in Germany.  I spent 3 of those years in Germany with a Pershing 1A missle unit.  Don't let anyone tell you otherwise, it was a war.  We won it.  Or did we?  We thought we had crushed the Communists but hey, they are alive and well.  They have made it to our shores.

I think we were better off as a nation prior to the introduction of PC.  We no longer say what we mean, for fear of offending someone.  We still think it.  We just bottle it up inside and pretend that we are tolerant and so much wiser.

PC allows the pussies to run our world.  I don't like it much.  Not much at all.  We have bred a nation of weak, self-centered, ignorant pussies.

That's all I have to say today.

From one old Cold Warrior to another. We won the damn thing and then our left promptly offered unconditional surrender terms. To us.

Six... That's exactly right, er, correct. They have taken over and, honestly, I don't like it much.

Another Cold War vet here. The Pershing 1A/MADM crew was in the next bay, I worked on the Lance/SADM/8" crew while in Germany. Knowing that the Fulda Gap had a nuclear umbrella kept things quiet for a long time.
Yeah, we won when the Berlin Wall came down (I got to see it before that happened- German/American football finals in Berlin, 1982.) The USSR fell apart and we squandered the "peace dividend" during the Clinton terms. I'm saddened by what our country has become, and the degradation of our society in the last 30 or so years.