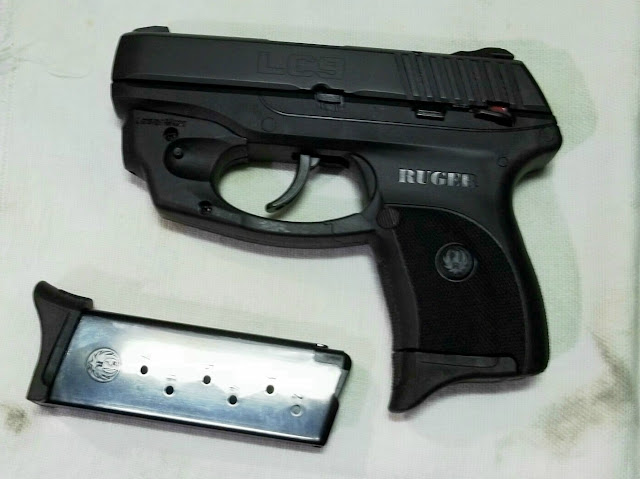 She talked to the salesman by herself and got all of her questions answered.  He didn't treat her like "some dumb broad" and he showed her the pistols that she asked to look at.  (LC9, LCP, and Kahr PM9)  She explained to him that she has arthritis in her hands and he made sure that this pistol would work for her.  (A very important requirement.  The LC9 worked perfectly for her.)   He never once tried to pressure her into something more expensive.

He asked me just one time if I wanted to look at the gun and I told him "no, it isn't for me".  After that I was completely out of the picture.  I actually walked away and looked at some other guns while they talked.

He did a good job.  She filled out the 4473 and paid for the gun all by herself.  He showed her the safety features and the all of the documentation in the box as required by law.  I was impressed with the entire transaction and very proud of her.  I think she felt good about the way it went with the salesman and with the overall experience.

We aren't strangers in this gun shop and the salesman knew who we were, but he isn't the person I usually deal with when buying guns.  "My guy" had the weekend off.

She has an LCR in .357 magnum that I bought for her a few months ago.  She shoots that just fine.  She certainly isn't a stranger to firearms.  She just wanted a pistol rather than a revolver.

Buying a gun "all by yourself" for the first time is kind of a big deal.  :)  She had a smile on her face all the way home.

Give her a hug for me. That just made me grin. :-D

I thought at first she had a problem with the LCR.:)

Brock... No, the only problem with the LCR is that it's a revolver. She decided she wanted a pistol. I like the LCR and will be more than happy to use it. :)

I like the LCR and will be more than happy to use it. :)

Can't beat a revolver for dependability, that's for sure.

I can see why she is smiling. A goo choice.