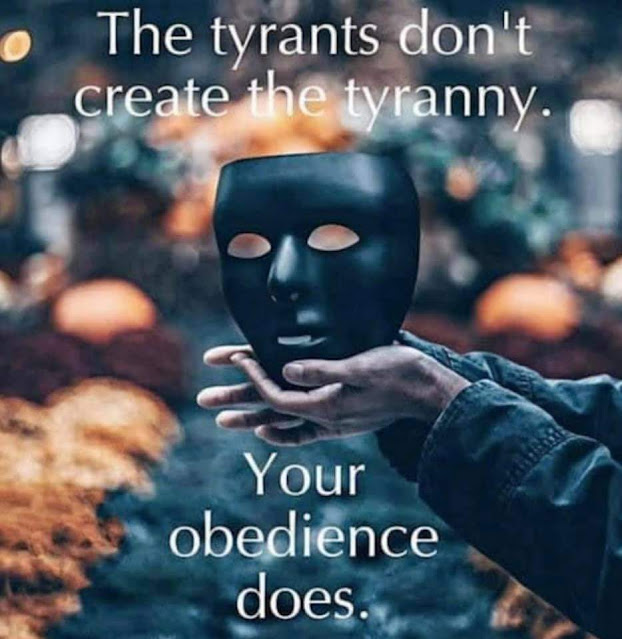 Someone sent this meme to me in a message on the fb.  Interesting.  And totally misguided.

Seriously though.  There is no tyranny in the US.  It isn't even possible.  'Ol Dementia Joe Biden and President Harris are going to be fair to everyone.  And the Democrat controlled House and Senate?  Same.  They are on your side.  They will hear all sides before proposing any legislation or signing any executive orders or creating any new laws.  Because laws apply to everyone.  And because they want unity and happiness across the land.  They'll end the Patriot Act, get rid of the TSA, eliminate BATF, and with it, the NFA.  Department of Education will close down, returning the responsibility for educating our children to the States.  The Constitutionality of every new piece of proposed legislation will be checked and verified, and then certified before it ever sees debate on the floor.  It's going to be great!  So many exciting things are coming.  All you have to do is comply.  And maybe change your way of thinking just a little.

Did you see where the House is instituting rule changes to assure that their official "documentary" language is all inclusive?  Apparently certain segments of our society want to change the meanings of words be more inclusive so they are eliminating words like mother, father, son, daughter, aunt, uncle, brother, sister, ombudsman, fisherman, etc from their official language.  You know, so a lady with a dick doesn't no one feels left out.   Well, no one other than the Conservative mothers, fathers, sons, daughters, brothers, sisters, etc.  It isn't enough to continually promote the false narrative that Conservatives don't like homosexuals, or transsexuals, or, transvestites, or trans anything or confused anything.  The problem is that Conservatives typically don't care if you are any of those things, and the Liberals are unwilling to accept that it isn't a big deal to most modern Conservatives.  Liberals have to constantly celebrate those "differences"and scream about how tolerant and inclusive they are, which they aren't.  Conservatives are generally pretty quiet about it, preferring actions to words.   Lets all just show up on time, get to work, and do our own thing when the work day is done.  That might include Jack and Jill straight couple going to the bar with Betty and Janie homosexual after work because, well, because Betty and Janie are nice people who share common interests with Jack and Jill.  All 4 of them are going to the rifle range on Saturday and then to an animal rights demonstration downtown on Sunday morning.  They are simply friends who don't allow their "differences" to get in the way.

So, you see, there is no possibility of tyranny in this country.

Honestly, I don't know where any of that came from.  Seriously.  I have no idea.