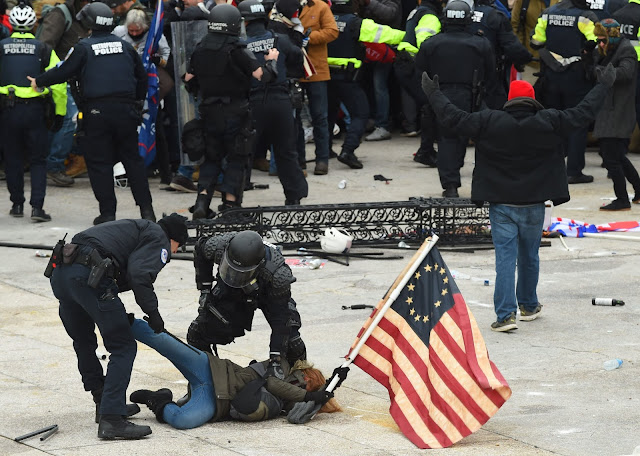 Is this even true?  It seems that there is some inflammatory text spread throughout this article.

"After ransacking the U.S. Capitol and threatening the lives of members of Congress on Jan. 6, they walked down the building’s broad steps unmolested and into the mythology of right-wing extremism."  (article linked below)

Personally, I think that a lot of people and organizations, from a lot of different political positions, are seizing this opportunity to put their ideas in front of an audience.  Never letting a crisis go to waste.  Like all the "fly by night" businesses that pop up after a large natural disaster to "help",  Here today, gone tomorrow.  Almost always enriched from the money of the folks most affected by the disaster.

What really happened in D.C.?

I also think that the words coming out of the many government alphabet agencies these days should give all of us pause to think...  Are they taking the opportunity to shut down communication between like minded folks?  I think we all realize that there are no secrets here on the Internet.  The "authorities" are always listening.  ;)  Will they try to shut down social media platforms like Blogger?  I don't think Google has a great record of supporting free speech when pressured...   I'm not paranoid, just curious.  I suspect we'll find out, eh?

Is it really any different today than it's ever been?  Do people think differently than in earlier days?  Well, yeah, probably.  Or not.  Conservatives want to be left alone to live their lives, Liberals want to interfere with and control every facet of our lives.  That hasn't changed much.  The Internet makes communication easier, but anyone can publish a blog or a twit or a message on the fb, it doesn't have to be true.  And I think a lot of folks have differing definitions of what constitutes truth.  And the folks who want to know what you are doing can track all of your conversations and actions easily, whether gubbmint or just some nefarious stalker.  No different, just easier.  Yes?

After ransacking the U.S. Capitol and threatening the lives of members of Congress on Jan. 6, they walked down the building’s broad steps unmolested and into the mythology of right-wing extremism. Many wore shirts identifying them as accolades of QAnon, riders in “the Storm” who believe the fever-dream conspiracy that they are foot soldiers in a war against Satan-worshipping pedophiles in the government’s “deep state” bureaucracy. There were also neo-Nazis and anti-Semites in the overwhelmingly white crowd, including a man wearing a “Camp Auschwitz” sweatshirt. Racists rallied to the Confederate flag of rebellion that some of the insurrectionists waved in the halls of Congress.

With President Trump only days away from an unceremonious departure from the White House, the vision of a mob desecrating the citadel of democracy felt for many observers like the end of a shameful period of norm breaking and tradition smashing. But for counterterrorism experts who have spent the two decades since the 9/11 terrorist attacks closely studying and fighting violent extremist groups overseas, the spectacle looked like something altogether different: the likely birthing of a violent American insurgency.

Another article here.  Talks about the nationwide  threat from Right wing terrorists.  Not sure the media spent as much time warning about last summer's widespread riots?  I dunno :)

Sitting here listening to Casey Kasem's AT 40, The 70s.  Brings back good memories.