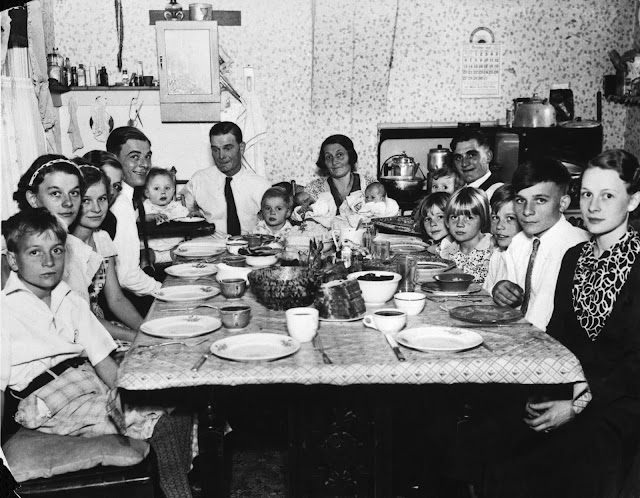 I copied this editorial in it's entirety from the Chicago Tribune.  Someone else had shared it on the fb.  I really hope that they don't mind, as I think it is important enough to share with everyone, including those of us who don't Trib...  I'm including the link to the original article.  Be aware that it contains a lot of "click bait" advertising. :)  Enjoy.

I spent summers as a kid with my Aunt at her Greek coffee shop in Hegwisch, which is a part of the greater Chicago metro area.   A different world.  She wasn't Greek, but my Uncle was :)  That's part of the attraction for me.  A good article.

In the pre-COVID-19 days, there were those large, intergenerational Sunday dinners when nothing was off the table for discussion in America.

Even now, if we were sitting down together, we’d talk of President Donald Trump lying to his supporters about overturning the election, before he incited a mob to storm the Capitol.

We might even talk of the push for political purges and tribal revenge fantasies, and of a nation that worries it is tearing itself apart.

America was tearing itself apart when I was a boy, back in the 1960s. And we’d talk about it at our Greek immigrant family Sunday dinners.

It was my first university.

We talked politics, race, sports, family crises, Cousin Pete’s hatred of bluejeans, and stories of the village, about the horse falling into the well or Truman the family mule.

We’d talk about old “Twilight Zone” episodes like “The Obsolete Man,” when we imagined that it would be the political right, not the left, that would cancel ideas and cripple dissent.

When some would become angry, the wise aunts would tell us to hush and to put some slack back in our ropes. Then they’d bring out the galaktoboureko and coffee for dessert and we’d all settle down.

We were family. We didn’t split up over politics. And there was always next Sunday.

But there was one thing we hardly ever talked about.

It happened to the family only 20 years before. It hurt too much. It had been terrifying and unspeakably ugly, and the wounds were still too raw:

The occupation by the Germans and Italians was bad enough and Athens starved. But when they left and the Communists tried to take over, the unspeakable things began.

“It starts out as politics,” my late father once said about the Greek Civil War. “But when the blood gets in your eyes, it’s not about politics anymore. It’s personal.”

It all becomes license for personal revenge. That man who didn’t want you to marry his daughter; the family that may have bested you in business; that teacher who blocked you from entering university; that farmer who moved the border stones marking the fields to take your water.

Or now I suppose, it might involve those trying to deny you employment and a place in civil society because you’re on the wrong side of their politics.

I’m not saying we’re at the brink of armed conflict now. I would never advocate violence. I condemned Trump for inciting the riot, demanding those who stormed the Capitol be sent to prison.

Many conservatives and Republicans who agreed with Trump’s economic and anti-war foreign policy have said the same thing.

But what I’m seeing now worries me, with Democrats in power, in control of the executive branch and both houses of Congress because of Trump.

“You never want a serious crisis to go to waste,” said former Chicago Mayor Rahm Emanuel. “And what I mean by that is an opportunity to do things you think you could not do before.”

That kind of thing does encourage clicks on news sites, but there might come a time when things go beyond clicks.

Trump voters have already been kicked to the margins of society, beginning in 2016. They’ve been labeled as “deplorables,” and collectively as Nazis and racists, branded as subhumans by the ministers of political culture in media.

This might shock some pundits and political actors seeding the ground for Truth and Reconciliation Commissions. But would the creation of an enemies list make for a more stable nation, or make things worse?

Not all those who voted against Hillary Clinton in 2016 deserve to be painted by the same, broad, left-handed brush. In Washington the other day, many of the thousands who gathered to hear Trump were peaceful.

So too were many of those Democrats who protested in the cities in the summer when looters took over and arson fires burned businesses and killed the downtowns.

But the summer rioters weren’t condemned as evil by much of mainstream media. And Democrats hardly mentioned them at their convention.

Dr. Martin Luther King Jr. was all about nonviolent protests. But he understood his nation too.

“But in the final analysis, a riot is the language of the unheard. And what is it that America has failed to hear?” he asked in 1967.

That quote was used by many in the media to excuse the violence in the Democratic cities in the summer.

But now, those in power and control of national politics, culture, the social media platforms and much of corporate media are making something clear.

They really don’t want to hear from the 74 million Americans who voted for Trump and who disagree with them. Instead, they condemn them. Or, at least that’s what many of those 74 million people think.

My aunts who brought out the sweets and coffee to settle us down at those family Sunday dinners have long passed.

They didn’t go to college. They read the newspapers for recipes, not punditry. But they knew firsthand what happens when politics becomes personal.

It’s what we didn’t want to talk about at those Sunday dinners when I was a boy.

Listen to “The Chicago Way” podcast with John Kass and Jeff Carlin — at www.wgnradio.com/category/wgn-plus/thechicagoway.

Chicago Tribune
Contact
Chicago Tribune columnist John Kass was born on Chicago's South Side. He is co-host of “The Chicago Way” podcast on WGN plus. He and his wife, Betty, have two sons. He loves politics of all kinds, particularly indictments and Chicago political corruption trials. He also loves fishing and barbecue.
Stay safe.
Peace
Posted by Blue at 09:47

Yep. Not really expecting to speak with any member of my family, ever again. Which is sad, but would be far sadder if they had not each already been heading this way for a long time.

Anon... Yes, that IS sad. Families are funny that way. I have 5 brothers and sisters. My Dad was pretty quiet about his politics, but he leaned center Left most of his life. Center Right as he got older. My Grandfather, who lived with us, was a Union Guy, and a Democrat. All 6 of us kids are strongly Right of Center. Now, my Uncle, my Dad's baby brother, is an idiot Union guy Democrat. He waits for his Union or his Party to tell him what to think. And between 2 marriages he has a dozen kids. All were rabid Democrats until recently. My Uncle has gone so far Left that even his kids are trying to distance themselves from him. He's no different than he's ever been. Ahhhh well. Life is grand. :)