The Party of Hate... 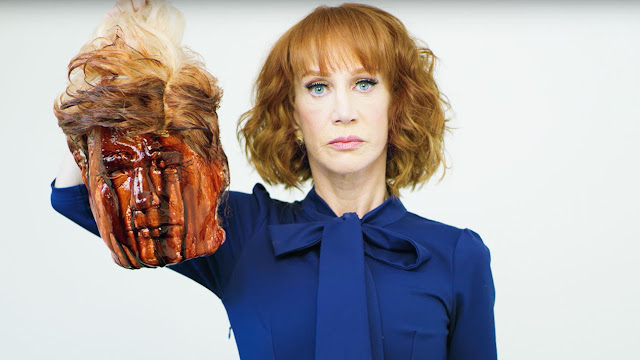 Madonna (Democrat): "Let's blow up the white house!"
Peter Fonda (Democrat): "Lock 10 year old Barren Trump in a cage with child molesters."
Johnny Depp (Democrat): "We need another John Wilks (sp) Booth!"
Tom Arnold (Democrat): "I fantasize about standing over Donald Trump Jr.'s dead body!"
Kathy Griffith (Democrat): Holds up a bloody, decapitated head of Donald Trump
Snoop Dog: (Democrat): Shoots a likeness of Trump in a music video, has Donald Trump in a body bag on his album cover
Joe Biden (Democratic President elect): "I'd like to take Trump behind a barn to beat him."
Corey Booker (Sitting Democratic Senator): "I dream of punching Trump in the face."
Maxine Waters (Sitting Democratic Congresswoman) "Harass Trump's staff and supporters in public and refuse to serve them."
DeNiro
Fallon
Colbert
Mellencamp
Springsteen
Neil Young
The list is nearly endless.
I think that every Liberal "entertainer" in America has made hateful comments about Trump and the Right.  It's what they do...  They follow their leaders.  Not an original thought among them.  Reading from the Party's script on hate.
And a lot of these so called stars went out of their way to be seen with Trump, before they didn't.  Which just adds credence to the fact that there are so many hypocrites out there...
But according to the left wing media/DNC talking points, it's Trump with the hateful rhetoric... all in the name of TOLERANCE...
.... But they're all about peace and coming together, right?
And I realize that folks are entitled to their opinions.  I am thankful for that.  But when opinions are decided by the Party...?  Hmmm...  Appearances are everything.  Visuals are reality.
Posted by Blue at 12:35

Anon... I pray to god that it never happens. They are evil.