Seriously, WTF did you think would happen...? 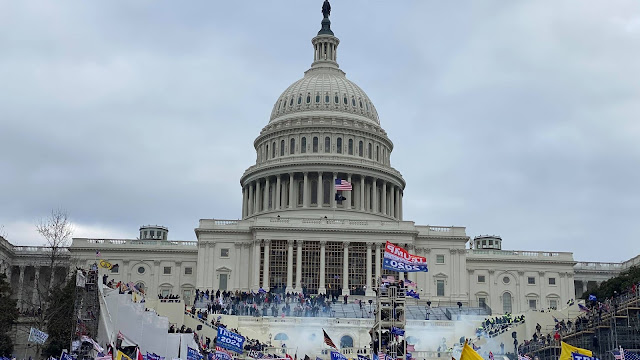 I have a friend, a young guy who use to work for me, who took his sons and went to DC to witness history.  (his photo up above)

I messaged him a couple hours ago:

Me: You doing OK?

JD: lol yeah. It was very festival like and I never felt in danger but we did leave about an hour ago

JD: We got a little gas our way but what day to be a Patriot

Me: The only thing that really surprises me is that my Liberal friends really seem to be surprised...        The blood is on their hands.

JD: Weird... A guy did catch a pepper ball through the cheek a little ways from us

He said that almost everyone was very peaceful and respectful, that it was a very small number of people raising hell.  He said no one was even sure who the loud folks were because they hadn't come with any group that any of the other protestors knew of.  I wasn't there so I'm not going to speculate.

One of my retired SF friends in NC said that there had been a bunch of chatter from Antifa for several days about "dressing as MAGA and infiltrating the demonstrators".  Again, I dunno...

But anyway... WTF did you think would happen?  The anti Trump rhetoric began 5 minutes after the election was called in November of '16. There was talk of impeachment even that night.  And the Representative from Michigan, Rashida Tlaib, infamously stated moments after she had been sworn in thate "We'll impeach the mother fucker".  Every single day for the last 4 years the Left has attacked Trump and his supporters.  The terms Trumpettes, Trumpsters, Drumpsters, blah, blah, blah replaced "racist" as the negative descriptor of anyone someone on the Left disagreed with.  Their maturity levels were simply amazing.  And now they feign horror at the goings on in DC...

The only thing that surprises me is that they seem surprised.

And they love cops now.

And they are talking of treason and sedition and all sorts of other big words that they don't understand.

The blood is on their hands.  Poor behavior has negative consequences.

Some of the people have been identified as antifa and BLM already. I suspected this would happen. And now a young woman is dead (allegedly she was antifa too, but no way to know)

There are serious rumblings from some of the congresscritters about invoking the 25th, and supposedly, omar up in MN is talking about impeachment. The woman who died was apparently an Air Force Veteran of 14 years.

This will not end well. But it has been a possibility since he entered the Office, as you mentioned, Blue.

People who march through cities and towns, destroying historic monuments, burning, looting, and assaulting, are called "peaceful protesters" while those who call them that applaud, and acquiesce to their demands. On the other hand, normally peaceful and law-abiding citizens who have been denied the truth, have had their voices silenced for the last four years, and finally say "ENOUGH!" are called "insurgents" and "marauders."

Dear Adrienne... I think it will take a few days to sort it all out. The Left is already finger pointing and name calling and demanding that supporters of Trump take ownership for these actions. Ya know, I think maybe our friends on the Right WILL take ownership for their actions. Conservatives are much better at taking responsibility for their actions than Liberals are. Perhaps there can now be a true national conversation about ending the division. :)

Grog... I made baked chicken last night, along with mashed potatoes and green beans. It was pretty good. I had shut off the politics and listened to music. LOL. You are right... Violence and death are always bad, especially during peaceful protests. The woman was killed by "law enforcement". I haven't heard any more than that. I assume that she was unarmed? I also agree that this will likely have long term implications and will not end well. The Left will go all out attempting to quash the rights of the people. A sad day.

Pete... Well said. I agree with you on every point. Sadly, the Left controls the media and yesterday's actions by peaceful protestors in DC will have long term negative consequences for all. I also agree that politicians are not looking out for the folks who elect them... ;)