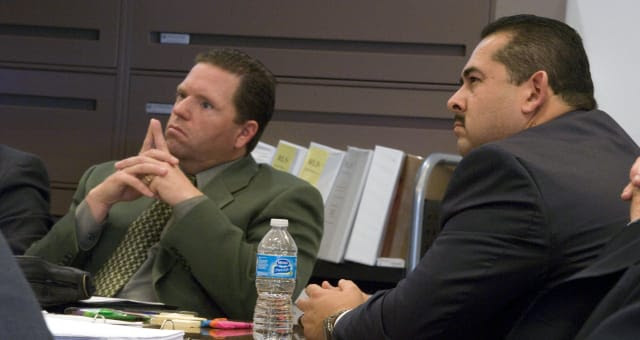 
SANTA ANA, Calif. (AP) - Two former California police officers were acquitted Monday in the death of a homeless man after a violent struggle with officers that was captured on surveillance video.

It was a rare case in which police officers were charged with a death involving actions on duty.
Former Fullerton police officer Manuel Ramos was acquitted of second-degree murder and involuntary manslaughter. Former Cpl. Jay Cicinelli was acquitted of involuntary manslaughter and excessive use of force.
Cincinelli embraced his lawyer and put his face in his hands as the verdict concluded.
Outside court, Thomas's parents condemned the verdict.
"Just horrified," Cathy Thomas said. "He got away with murdering my son. It's just not fair. So I guess it's legal to go out and kill now. He was so innocent. It just isn't fair at all."
Ron Thomas said the defense "lied ... continuously" about his son's character, such as his drug use.
"It's carte blanche for police officers everywhere to beat us, kill us" because the verdict proves "they'll get away with it."
Thomas was taken off life support five days after the July 5, 2011, scuffle with several officers.
A third officer is awaiting trial. Three others were not charged.
Four-term Orange County District Attorney Tony Rackauckas tried the current case himself, a sign of its importance.
Thomas' death led to days of protests in Fullerton, a Southern California college town, forced the recall of three City Council members and led the police chief to step down.
Dozens of Thomas supporters, who called themselves "Kelly's Army," packed the courtroom each day of the five-week trial wearing yellow ribbons and buttons bearing his image. Ron Thomas said his son suffered from schizophrenia and didn't understand the orders from police.
The surveillance video was key evidence at trial and was played repeatedly by attorneys for both sides. The 33-minute video begins shortly after Ramos pulled up in his patrol car and continues well past the end of the struggle, capturing the officers' exchanges as Thomas lies unconscious in a pool of blood and paramedics work to revive him.
The incident began when Ramos responded to a routine call about a disheveled man jiggling the handles of car doors in a busy Fullerton transit center parking lot.
Read the rest here.
~~~~~~

The victim should have just told the officers that their actions were unConstitutional. That would have solved everything...!

Did you protest the Martin decision too? I wasn't in the juryroom but would trust their decision more than the speculation of one who isn't in possession of the same facts.

Anon... Did you watch the video of the Thomas beating from way back in July of 2011?

The Martin case and the Thomas case are in no way alike and have absolutely nothing to do with each other.

Thanks for stopping by! :)

Indeed I saw the video just as I saw other videos that mean zero without having access to all of the video. And just as the Martin case was protrayed by the media I see the same thing here.

Thanks for allowing me to post my opinion. Its your blog and its nice to see someone who will tolerate other opinions.

Your opinion is always welcome here, even when we don't agree.

I found it interesting how the media did everything in their power to portray Trayvon as an angelic little prince who was sought out and murdered because he was black. They carried that portrayal for over a year. They still do. Trayvon was a thug.

Kelly Thomas, on the other hand, was portrayed as a drug adled violent street person with no redeeming qualities. He was beat to death by the State, on camera, and it was deemed legitimate. I don't believe that any normal person could watch the video of his killing from beginning to end and not believe that excessive force was used, leading unnecessarily to his death. Kelly Thomas was killed for sport. Had Kelly's father not been a retired deputy Sheriff, his case would have never seen the light of day. It would have been long ago forgotten.

It is hard to admit that we may have marauding bands of cops in this country, killing citizens without reason. But we do. In America. Land of Due Process and Liberty. Though it may not (yet) be sanctioned by the State, it is allowed by the State. That should scare the beejezuss out of any Citizen.

Have a great day!